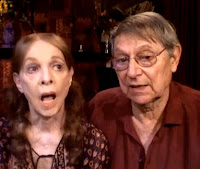 Somewhat reluctantly, the Cullums remember dark days, when it didn't seem as if they were going to be able to live on happily ever after.

Days when things were looking up, for John in theater and Emily in dance -- he was in the musical, "1776," getting bravos, and offers for other shows, and she was dancing in major concert series, and scheduled to perform a solo with a symphony orchestra at Lincoln Center.

Looking back at what happened, they've often wondered if they had known what was going to happen, would they, could they have prepared for the bad day in Indianapolis?

I hadn't remembered that you almost didn't put on your seat belt. What I do remember is that the old-fashioned lap belt almost cut you in half.

Well, your face may have been a mess, but it is certainly beautiful now!

That is part of why I love you so much! You are such an amazing survivor!!!!! And you do know I love you for being the amazing person that you are, my darling friend!

Love you so much!

Still in awe of all you were able to overcome. You're amazing.

Hi Emily,
You look like a dancer! Can't wait to dig in to reading "Somebody"...love a good read! Bookmarked this site!
Hugs,
Cynthia