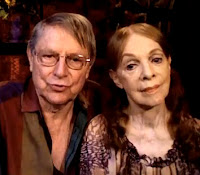 John Cullum's career, once it got going, took off and has kept him working primarily in musical theater -- in long runs on Broadway, playing leading roles. Emily Frankel's career was mostly one night stands -- she performed in every state in the union -- small towns, and some larger ones, more than one thousand one night stands.

I've been a traveling salesman for dance... bringing dance into communities that had never seen any dancing other than folk dance, line dancing, dancing that was done in local bars and gyms.

Emily, you're an inspiration to all artists. Congratulations on all of your one night stands. John is one lucky man! Thanks for posting your videos, and we look forward to seeing more!

Did you do all the driving or did the other dancers share?

Emily - amazing! I loved the teaser at the end with John talking about how you booked your tour - I cannot wait to hear more!

See my tribute to your husband on the post you made to my FB page. Among other things, I worked at the Neighborhood Playhouse, which Martha Graham co-founded, for years in every possible capacity. She had the floor between the fifth and sixth floors knocked out to create a huge dance studio with rows of windows; by the time I worked there she was gone. The elevator in the building will at will take off, pausing at floors, reversing, and then decide to stop when it will. This to me was obviously Martha using the spine of the building to say, Attention! Do not forget me. I don't find that message in this blog, you are still very much here, but I do find the same spirit. - John Ellis, new friend.