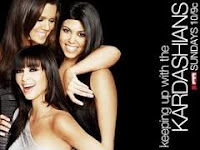 How did it happen, that I have to hear, see stuff and nonsense about these girls, this family of I WANT TO BE FAMOUS, PAY ATTENTION TO ME girls?

Why are these not very special girls in the limelight, in the news?

Okay, a producer made them into a show in 2007, and it was a hit, and its going on, and on, and on. Audiences love them.

Why do they love them? Who cares, or can identify with them?

I think it is the SELL -- the instinct and taste of smart producer people who feel out the pulse of audiences today, know the appetite -- and feed audiences, stuff audiences, with the tasty, not nourishing, yummy desserts -- body and soul fattening treats.

I'm not mentioning the producers names -- the names of the bad guys who've produced various talent shows similar to the Kardashians. Like the producers who've created the various murder/death/violence shows, they are -- for me -- the ENEMY, birthing, shaping the next generation NCIS creators. A few kids growing up now, fed, bred on these old bad guys' creativeness, will replace them in a few years. And, undoubtedly, the younger generation will gift us with more, worse, culture-crippling reality shows that are edible-inedible garbage.

I don't know why we had to participate in the wedding, the gown, the guy, the "name" guests (whose names I never heard of), the silly camera-conscious little boy who "stole the show," the commentators told us/sold us, ad nauseam. The kid wasn't cute and there was no show to steal -- the dress, the gown, the decorations were boring!

And 10 million dollars! $10 mill for a wedding of a nobody whose biggest contribution to the world is her managing to be someone we are noticing -- envying? admiring? wanting to emulate? Why? She looks like umpteen other not memorable pretty girls.

The 10 million bucks could have been spent on something, anything other than this not special, very ho-hum ordinary event.

Of course I could Google and gather facts, background, the story behind the story of how the pretty girls in this family managed to emerge from the masses of pretty girls who want to be famous, important, be stars in movies, TV, 'blips," hot items, flashes on the giant screen of world-wide everything news.

I don't want to pay attention to the Kardashians!
Posted by em's talkery at 4:00 AM

Your own advice from a previous post is best: just turn off your TV.

Very insightful post. I think that your statement: "I think it is the SELL -- the instinct and taste of smart producer people who feel out the pulse of audiences today" sums up why people are so interested. They want to feel as though they're a part of this glamorous world. Unfortunately, people aren't shown too much of true heroes who develop new forms of life-saving medicine, help others through volunteer work and/or donating to charity, etc

Dear Em: I have never watched the show but by the cover picture-it looks boring to me. I don't think I could have sat through the show you watched without falling asleep or getting nausa! Lol! Money wasted again on nothing...
kam

But..you apparently DID watch this bimbo's wedding...you know about her ring bearer..why did you even watch and waste your precious time?

I have zero interest in them or any of the various other nobodies with no class who have their own reality shows.

I do watch Flipping Out, because Jeff Lewis is REALLY terrific. He's funny as all hell and he is actually running a business that is fun and interesting. Other than that, I can't think of any other person that I have even the very vaguest interest in.

The rest of them are a batch of bimbos that I have virtually no interest in in any way shape of form.

If you don't watch Flipping Out (I think its on Bravo), you are missing a really charming, funny guy who is actually working for a living and lets us into his wonderfully busy, creative and funny life.

I agree, I don't want to pay attention to Kardahians either so I won't!

They're marketing themselves to sell their products, Paris Hilton does this too. xxxxoooo Heather