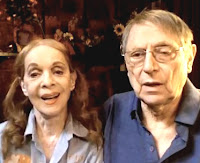 Your video made me remember when I was accused of being racist by a young black girl in our office. I had reverted to my mother-tongue (south) while we were talking. Our boss - from Georgia - had to explain to her that we all talked like that south of the Mason-Dixon line. I think we could all use an 'Agnes' in our lives. Not just for the cleaning, but for the good humoured chuckles as well.

Oh my! What a video! Very funny about Agnes the maid played by John Cullum. He does a rousing part that made me smile and laugh alot. Have you seen the movie-THE HELP? It is a very good movie. When those alwful tasks of cleaning come around I guess it is easier and more fun to let John become Agnes to get the job done....memorable video. kam

I'm afraid I was very very bothered by this video. How would your African-American friends feel about it?

I'm almost died laughing 2 minutes into the video. His southern slave girl accent was dead on. Everyone does some wacky things at home and you guys we brave enough to share it. I happen to be Chinese, Japanese, Mexican and an Extra Terrestraik in my own home from time to time.

I read this and then went away for a few days. My mama and daddy were deeply southern. My mama although from humble, but solid 'good family' beginnings (not rich family, but 'good family') did at times in her life have a quite certain southern woman entitlement ~ this was very evident in my childhood and early teen years ~ I as the only daughter was 'pressed' into her service. Bottom line is I had regular chores and the over and beyond heavy duty chores. As you can now see by my presence here, the chores didn't uh 'kill' me. Gosh, there were certainly times I thought Mama's attitude about it, I would never survive.
* * *
Today, I have a 'thingy' for not wanting to be 'the maid' ~ my daughter works full-time, but I only do 50% of the housework. That's it 50% only. I am capable of doing more and I stubbornly will not do so. My daughter has often taken after her grandmother, my mama. I wish to avoid any semblance of what I consider to be 'haughty entitlement'. So far just these past few months, it's working! Daughter really has pitched in and rallied her part, even the heavy duty chores.
* * *
If I recall correctly, right before this present rally of hers, I did say something like "You're welcome, Mizzzz (daughter's name)" in my best 'southernese' sounding dialect. She was deeply offended by that and asked me not to repeat it, for her son, my grandson is an African American teen. Grand was 'clueless' about all of it, but she didn't like it. This is before we watched the movie "The Help" that came out and believe me she and I have now seen it, but Grand hasn't, so he's still clueless.
* * *
So here's to whatever needing to be done getting done, however it can get done!
Luv to you EM, your John Cullum & FAMILY ~ I'm @grammakaye on twitter.