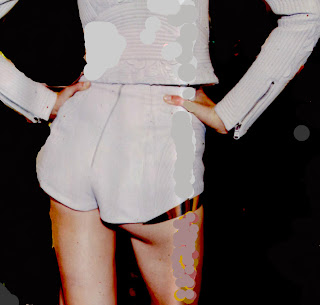 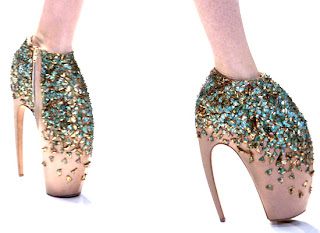 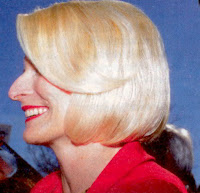 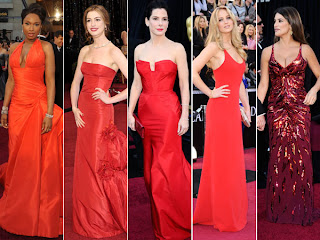 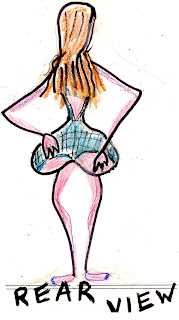 It's those high heels that gross me out the most. Grotesque designs apart, I've noticed that more women are wearing really high heels, and I cringe for their feet. Why can't we set a standard for beauty that includes healthy footwear?

I admit there are pros and cons to short shorts. Some women/men for that matter, shouldn't wear the shorts they try to pour themselves into. But to each their own right? As much as we see half dressed men and women on covers of magazines at the check out lines, you'd think there would be a race to see how many articles of clothing we could put on, instead of take off. But I digress. The reason I believe so many women/and men dress the way they do, is because of the well programed minds we have to compete with one another. Fishnet stockings were once reserved for strippers (performance artists). And now they are worn by news anchors all over the world. And it looks fine. It partially has to do with how you carry yourself. Either way, if you have shorts on that are clearly cut for your dairy-aire to hang out, you either are seeking, or begging for attention. Competition with the same sex is what drives fashion. I believe it always has. And yes, its just as eye turning now as it was in the 60's. Just like its meant to be.

I'm not sure if short-shorts ever went out of style. I always expect to see them once the weather warms up.

Black vs Red? Black equals sophistication and also equals corporate dinner parties in the minds of women. Especially young ones. Red equals passion, sexy, and the fact that as a woman, she's looking to attract attention, a man, or both. Older women who wear red dresses are usually looking to land a new man after a divorce or break up, especially in holly wood.

Blone you ask? I like to think that the blonde phenomena was made by Hugh Hefner and playboy. At one time they were all blonde. So when you've got a popular magazine with girls willing to take their clothes off and men buy it in droves. Then that's what other women will think is sexy and that they need to don a blonde hair do in order to attract a man. Add in the "dumb blonde" stereotype and men will gravitate toward a dumb girl who's easy to con into taking her clothes off. And since most men think below their belt, why on earth would they want their more intelligent and reserved brunnete who actually has to be worked to get laid. Aside from the sterotypical conventions, women do whatever fashion and media writes or potrays as sexy. Sorry, that's pretty much fact.

Lastly, crotch high splits, leg out dresses, fact is, sex sells. No matter how reserved or racy. Sadly I'm in the minority since I prefer a brunette without a crotch split who's more reserved in public and a ridiculous animals behind closed doors.

What an interesting blog today! My daughter is naturally blonde so she'll be glad to know she is "IN!" I remember hot pants, tight jeans, and the high cut short shorts. Being a plus size, I don't wear any of the above. I believe in covering one's butt! kam

One time, one appropriate time over a 4th of July weekend I wore a delightful 'hot pants' outfit in the wee early 70's. It was cute, I still had my figure, a dang nice very slender svelte figure I will add. I was cute and there were no 'b*tt cheeks' hanging out. Uh only thing was I got 'mashed on' by a bunch o male wanna be 'one night standers' the kind of 'hit upons' the likes I've never seen before or since. Nor truly never wanted to see again. The cutest and most fun 'hot pants' outfit turned out to be a 'creeps magnet' nightmare. Appropriately, they were placed in the trash. Better them trashed than me! Whole lotta love to you Ms. Em & your John Cullum & Family! I'm @grammakaye on twitter.

Honestly, I think that these low waisted jeans that ladies wear are a bit much. It doesn't matter your weight, it seems as though these pants create a muffin effect. Not only that, the coin slot in the back grates on me.

What I really like that I am seeing is the "Mad Men" inspired looks. These retro 50s looks are so flattering on most figures. They also hint at a 'better' time with less stress.

I find a woman who wears more elicits more attention.

Sexy is a matter of opinion, and the new retro looks are 'damn sexy'.