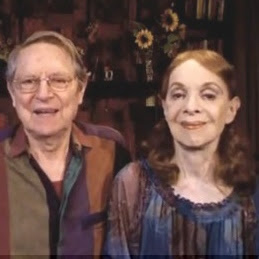 Very good blog today Em! I laughed and smiled along with you and John discussing rehearsing and performing for a live audience. I was in several plays in my younger years and enjoyed the relaxed rehearsals and cutting up we did as we practiced. Thanks for bringing back great memories.... kam

John and Em it was an excellent performance!!! John has explained so very well how performance canbe a great sense of achievement and satisfaction to a performing artists like him. He is so forthright that the artist wants to please all the stakeholders and how he puts himself lasts in the list of all such stakeholders. No wonder Em wants to hire him for a year and like a true artist and performer John promptly agrees to be hired !!!!

Honestly speaking you both have been performing so well and make Ems blogs so interesting and uniquely different and so much lively as if we are watching theatre.

Interesting! I tried to think back to my own very brief, career as an actress. I think I enjoyed both equally for very different reasons. I loved the building process and how it evolved, but I also loved the adrenaline rush that I got while on stage. I can't think of anything that felt quite like that.