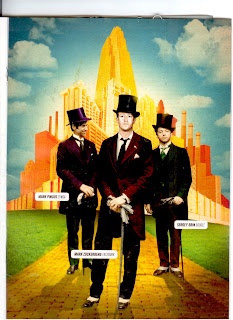 What a picture! I wish I'd made it myself. It's been haunting me ever since I saw it in March, decorating an article. Newsweek photographer, Jesse Lenz, put it together from various sources.

Google's dancer said, "We want Google to be the third half of your brain." Zynga's dancer is a Mobile Gaming expert, and Zuck -- wowy -- he's world famous -- lauded, given awards, respected -- deemed bold, called an innovator. He's an example to the younger generation of how to succeed in business.

I think he has tried hard to succeed -- he's a very smart star dancer, though, as a Facebooker, I am seriously annoyed with some of the changes he's made to streamline things for us, his 800 million users. We are buyers who came in to his theater, and grabbed the best seats -- though we don't pay cash to connect with friends, we pay by lending FB our names, and data.

Yep, there's Zuck in the center -- the lead dancer, who's got the dance routine down pat -- shuffle, hop, step, ball change. The other two dancers are happily observing, checking, and imitating him -- learning the routine from behind. Those tap steps are tricky.

Yes, a huge audience is watching.-- lots of them wondering if this very smart star, Zuckerberg, screwed up the IPO -- the initial public offering that opened the show. Some think the IPO was too fancy. Some insiders told other insiders that the show was going to bomb. Big money guys who back the big shows, backed away, while other guys rushed to buy, and learned, oops, they lost about 25%.

Hey, the show must go on. The trio's still dancing, performing full-out, though lawsuits are appearing. Hey, even if the leading dancer goofed, or one of his choreographers at Morgan Stanley goofed, he's dancing.

It's a big show! The show must go on, right?

Did you see the wedding pic of Zuckerberg and his bride. He's developing a paunch! That will change his image.

Interesting blog about 3 famous men. Didn't know their names, but know their busineses. I play Zynga games on FB alot. Lots of my friend's do too. It is a booming business!
Thanks for sharing this info on these 3 star dancers in our world today. kam

There's not much anyone can do about the people who run the internet.
Systems evolve and old social media sites give way to new ones. There'll always be something new coming along, and someone who's running it.
So if you don't like the way these guys run things, wait for the next iteration. No system is ever perfect.
Louise Sorensen
@louise3anne twitter

As much as those three fellows have been successful, what about those who came before them? If you look at the current issue of Forbes Magazine, you will see LinkedIn CEO, Jeff Weiner. Without the work of Jobs and Gates, we may not have these others.

I applaud the minds of our forward thinking digital pioneers. But as the old adage states, you can't put the horse before the cart.

This is the reality of the New Bold World which is shrinking when it comes to connectivity.The physical distance is becoming irrelevant !!!! Someone was to leverage the technology advancement and it happens to be these three men at the present juncture in the series of many such men.

As you have so nicely related to ballet on the stage and described the picture from an eye of a passionate dancer like you. I find this description in your blog very interesting and also a very good piece from a different angle. I do not think I could have made such a good blog from this picture and conveyed the feelings so well. Congratulations on your this skill of writing!!!!!!!!

Those folks scare the hell out of me, Em.

I get past that fear by knowing that there's a generation coming up that knows how to deal with them―I surely don't.

My son was raised with good values, and he and and his wife are raising my granddaughter the same way…They're our saving grace―they, and people like them. There are enough of them oiut there to neutralize the crazies.

I'll never forget how everyone went into panic in 1968 when the hippies devastated the political scene, (I helped). The suits thought it was the end of the world…and they were wrong.

Very interesting blog. Your writing skill as an author with an eye of a dancer is clearly reflected.