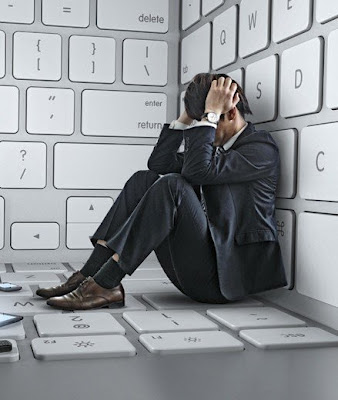 Do we need research to tell us that the Internet is making us crazy?

A big cover story in Newsweek has declared and proved that the Internet makes us lonely, depressed, and sometimes creates extreme forms of mental illness.

Questions about the Internet’s deleterious effects on us are as old as the Internet, which was born with in fifties with the first computers. If you wanted to be in tune with the times, you read your instruction manual and slowly, nervously learned how to do most of what the manufacturer promised your computer could do. It wasn't till the early nineties when AOL was launched for "DOS," that you joined AOL or some “Internet service provider,” and wow – joyfully, fearlessly, started visiting various places on the Internet.

Well... Now there are scary facts -- proof that we’re being hurt by the Internet is piling up.

Researchers report that adult Americans spend about eighthours a day on the computer, more time than they spend on any other activity including sleeping. Teens fit about seven hours of screen time into the average school day. The average person, regardless of age, sends or receives about 400 texts a month (that’s four times what it was five years ago); teens process an astounding 3,700 texts a month.

Many authorities on the subject are saying we are getting addicted.
.
Peter Whybrow, the director of the Semel Institute for Neuroscience and Human Behavior at UCLA, said, “The computer is like electronic cocaine, fueling cycles of mania followed by depressive stretches.”

Nicholas Carr, whose book “The Shallows,” a highly praised treatise on the Web’s effect on cognition, said, “The Internet fosters our obsessions, dependence, and stress reactions.”

Larry Rosen, a California psychologist who has researched the Net’s effect for decades, has declared, [it] “ ...encourages and even promotes insanity.”

The concern about the Web's pathological affect has intensified since Larry Rosen’s new book, “Disorder,” was published. His team surveyed 750 Californians -- teens and adults – their tech habits and feelings about those habits, and their scores on a series of standard tests of psychiatric disorders. Rosen found that most respondents, (with the exception of those over the age of 50), check text messages, email, or their social network -- “all the time” or “every 15 minutes.” He also found that those who spent more time online had more “compulsive personality traits.”

At UCLA Memory and Aging Research Center, scientists have reported that the brain of a 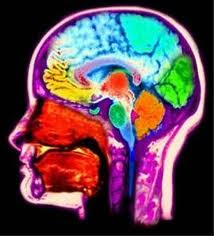 computer addict looks like the brain of alcohol or drug addicts. Chinese researchers concur. They've published photos of “abnormal white matter – extra nerve cells in the areas of the brain that deal with attention, control, and executive function.” A similar study found similar changes in the brains of video-game addicts. 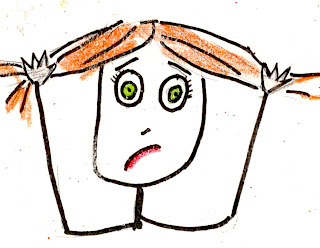 Hey, I don't need researcher’s reports, or brain scans, to tell me what I’ve observed about myself. I’m working longer hours. I talk faster. I’m often cranky. I yell and actually lose my temper. I get seriously impatient --I storm out when I ask my husband a question and he takes time to mull it over before he answers.

Have you experienced “Facebook” depression, or Tweet “depression? I have. (Is it because everyone seems to be getting more friends and more followers than I am? Or because social networking often seems ridiculous, dumb- dumb, a big waste of time?)

No doubt about it -- based on what I’ve learned from Newsweek, everything I’ve described about my behavior says I’m addicted.

What should I do about it? Newsweek suggested medication, like Xanax -- it's is often prescribed for addicted adults. Research reports the number of people using Xanax has tripled in the past five years.

Dr. Em tells me GET A NOTEBOOK – for three days, keep track of how much time you’re Interneting, (Facebooking. tweeting, or creating your blog.) Then, cut the total time down by 1/3, and make a list of what you can do with the time that you've freed up.

I’m telling myself and you what I wrote in my book, “Somebody, Woman of the Century” -- it’s what my heroine’s Grandpa told her– words that the older, wiser Cordelia told her children -- “You are the master of your fate, captain of your soul. It’s up to you!”

You're on it, Em...been cutting back already and actually accomplish more on and off the web.

Hi Em. Sometimes I do spend 8 hours or more on the internet, chatting or just reading links.
This is what I do in my spare time, at night, after all my work is done, to relax.
Or during the day, I will reward myself with internet breaks. Do a hard job I've been putting off or dreading, then relax on the internet for awhile.
The internet's also a good way to interact with people from whereever you are located. So you visit people, but save all the travel time.
I'm sure the internet is addictive. Most forms of pleasure are.
Like any other addictive substance, there will be people who waste their lives on it.
But there will be people who learn to control their intake.
Studies show that the brains of computer addicts are similar to the brains of alcohol or drug addicts.
Yet studies also indicate increased brain cells in the area of the brain involved with attention, control and executive function.
It seems to me that when writers or scholars or anyone whose work involves a lot of reading and writing are doing their thing, it's not unlike being on the internet.
Writers practice their craft for hours each day, and the more you write, the better you get at it and the easier it becomes. But no one ever says they're addicted to writing.
Except they're spouses maybe, who never see them. Or watch them sitting typing for hours, or staring out the window, and wonder why in hell they don't go out and do something useful.
But...
I've just had a conversation with you, heard your thoughts, and given my opinion. We communicated, without either of us taking a car, bus, train or plane.
That is the magic of the internet.
Just don't get addicted to the carpet ride.
Louise Sorensen
louise3anne twitter

This blog is interesting and the info is over whelming. Look at where we are now with the internet and google...seems to me people are happy and not concerned with the affects on their brains. i could care less because I am happy and content to be on my computer and have that freedom of doing and going where I want day or night on the internet. It is challenging and fun at the same time. kam

Guilty as charged. I spend waaaaaay too much time online. I mean, every moment I can.

Reading your blog, or course.

I love the fact that almost anything can be found via the Internet.

Call it my vice, habit, drug of choice. Surely there will be some serious withdrawals if, and when, it goes off for any long period of time. Such as an hour.

Ach! I'm an addict. I'll add it to my list of addictions along with things like potato chips, popcorn and reading!

Good strategy. It's just not worth it to ruin your life with too much Internet.

Em, I don't think people over 40 [as John, you and I, just are :)] fall into that trap. It some younger people who have nothing else to do except get addicted to whatever the see or do. :)!

Hi! I'm Linda and I'm an addict! My brain was captured by AOL, Prodigy and Compuserve back in 1995 and has not belonged to me ever since.

I know I am an addict, because I actually start to "jones" for the internet when I am not on it. I feel a buzz in my brain as I see that wonderful Google Chrome open up my world.

What can I say? I know I am addicted and I would not have it any other way. So take me internet! I am yours.

WELL, yes and no. I'm on my computer LONGER than eight hours usually, but then I'm writing, tweeting and retweeting every now and then. I don't think I'm addicted to that but there is one thing that is seriously addictive and that's Facebook games. Wow, we all know they're a waste of time but it's still so easy to find yourself playing game after game of bejewelled or planting and looking after crops on imaginary farms. I remember one night telling my husband that I had to get up early so I could get to my pumpkin plants before they spoiled. As soon as the words left my mouth I realised how ridiculous it sounded...

doesn't the age show who can be addicted to computer screen . ! any brain is hungry for information! ( by plasma-A