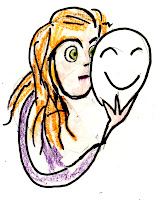 I used to lie about my credentials, but I grew up and learned to tell the true truth, not exaggerate -- accurately list what I've done on my resumé.

The other day I read about Yahoo's CEO, Scott Thompson being ousted after a false college degree was discovered in his official biography, and learned that other well-established guys I've counted on, have lied about their accomplishments.

Robert Irving, food network host, claimed he's served presidents and the British royal family. He apologized and was replaced, but later, became host of the show, with a corrected bio. (Hmm -- apparently his lies didn't really hurt him.)
Tom Willis, Yale Football coach, used his personal experience to convince a player to play in a game, rather than head for London to be interviewed for a Rhodes scholarship. When the university's administration learned that Willis had never been a candidate or applied for a Rhodes scholarship, Willis resigned. (Did he do a good deed for Yale, or ruin the players life? )

Marilee Jones was head of MIT admissions for 28 years. When the administration learned that she'd padded her resume with fake degrees, she resigned. Today, Jones is just an admissions consultant. (Hey, lucky lady -- she's still got a job.)

When David Edmondson became CEO of Radio Shack in 1994, he said he had degrees in theology and psychology. In 2005, the board of directors learned he didn't have those degrees. Though the board didn't press him, he resigned. (Nice guy -- we wrote him in 2000, praising the manager at our Radio Shack. Edmondson wrote back praising John Cullum's work in a show he'd seen. Maybe Edmondson's studying theology, psychology and theater arts, acting, pursing his real interests.)

Jayson Blair, NY Times reporter, fabricated some stories that the paper published. An editor discovered he'd plagiarized a lot of material, and never graduated from college. Blair resigned. His wrong-doings were front page news. Subsequently. Blair wrote a book about his transgressions (Has he turned over a new leaf? He's currently earning $130 an hour as a life coach.)

Michael Brown, FEMA director in 2005, who led the flawed hurricane Katrina response, said he oversaw emergency services in Edmond Okla. Time reported that he was just an intern there, not an executive. Brown resigned and now hosts a radio show. (So he's still working, earning a good living. )

What does this mean to you and me? Go ahead and fake? Fake a little but do it carefully? Fake and then grow up and tell the truth, apologize, undo what you did?

My post,"Credentials," about how I faked mine, is on Em's Talkery, CREDENTIALS, 4/5/09. but here's the essentials.

Age 11, on Saturdays I sold blouses; at 12, I cashiered at a men's store. At 14, claiming to be 16, I worked as a clerk-typist for Hearst Publications in NYC -- mostly alphabetizing file cards . (I'd taught myself touch-typing, but mostly I had to hunt-and-peck.) A few months later, I became "advertising director" for Dance Magazine. They liked my work, but I had to quit when they asked for a copy of my college degree so I could get a raise. (I was 15, claiming to be a 21-year-old college graduate.)

It happened again a year later when I was teaching dance for $2 an hour, at Forest Neighborhood Settlement House. With my invented credentials, the job paid for my own dance lessons. I had to resign when they gave me a paper to fill out for their NY Board of Education files.

At the Humphrey Weidman Studio Theater, studying modern dance on a work scholarship, I ran errands, addressed envelopes, mopped floors, scrubbed toilets, and painted the walls, till one day, after folding and stuffing brochures about their summer course -- with ridiculous bravado -- I borrowed their card file. It was a list of colleges where they'd performed.

I put together a brochure with photos -- posed in improvised costumes with handsome tall Mark Ryder (one of Martha Graham's partners), whom I'd met when I was "Costume Lady" at a summer theater. I typed a few hundred letters about the Ryder-Frankel Duo and after we got two bookings, we choreographed a program.

And that's how my career, my marriage to Ryder, my Dance Drama Company, my world tours came to be.

I did what I thought I had to do.

So what am I advising? You do what you need to do to get the job.

Sandra Bullock said: “After a while, you have no idea how old you are because you've lied too many times.” Al Pacino said, “I always tell the truth. Even when I lie.”

Nowadays, mostly I write fiction.
Posted by em's talkery at 4:00 AM

Emily...I am a Headhunter/Recruiter, and a Vietnam Veteran. There are thousands of phonie balonies on LinkedIN, who are not who they say they are. The Stolen Valor Act was shot down by the supreme Court just last month. These are folks who lie about there service in the military, accomplished medals, tours of duty. All of this covered under the first amendment, that lieing is OK. We are surrounded by ignorance and phonies.

Interesting blog today. I never had the guts to lie about my job or resume. The jobs I wanted I mostly got anyway and worked up the ladder to get raises. I understand you did what you had to in order to get a job or ahead.
Look at where you are now and all you have accomplished in your lifetime. kam

I never was good at lying. And with a long Catholic school education, I mostly learned to keep my head down in order to keep it from getting shot off.
So I never lied about my credentials. I was never sharp enough to do that.
It sounds like people who lie about their credentials are smart enough to do the job anyway. So what's the use of credentials?
And from the examples above, the lies are enough to land a job that lasts for years, or if found out, a next job. In this economy people who've been found out in a lie and still get another job are best categorized as survivors. And that's a huge accomplishment.
I think we do all do what we need to do.
Nowadays, is it more difficult to fake credentials? Maybe it's easier.
Let's just hope, that for the sake of safety and the success of our countries, that those who land a job from faked credentials, can deliver.
Louise Sorensen
louise3anne twitter

So interesting! As Neitzsche said, "All things are subject to interpretation; whichever interpretation prevails at a certain time is a function of power and not truth."

Em, this was a brilliantly written piece and well researched. You and others did what they had to do those days to get by. Everyone check these days. In the UK, you just won't get passed the door. They even want to know one's Mother's maiden name.

But again, I loved the article. I learned a new word 'alphabetizing' and one thing's for sure, neither Sandra Bullock nor you will grow old to my eyes. :)!

The problem is people want "experience" and ignore ability. I think a resume is a joke. If I can't walk in show my skills, no resume is worth the paper it's written on.

But people hiring, rather than looking at the person, getting a demonstration of skills would rather look at words on a paper. I can tell if someone is lying about their skills!

Lying isn't good but I understand people stopped by a barrier of rules, a nonsense barrier of paper, simple them others what they want to say.

Hell if you lied to get job and did great, that's the desired product of hiring. Who wants to buy a diploma? I understand you can get almost anywhere now days :-)

But tell the truth as companies that can't look at you and your skills will not be a good places to work. They are mired down under titles and regulations and ineffective procedures....

Nice to meet you, Em! Loved this piece -- and admire it. I too never had the nerve to fake my resume. Rats, I must have too much respect for authority. I remember when one school was dying to get rid of me b/c of my free teaching style, and they sent out a demand that all adjuncts produce their graduate diplomas. I had one. Bummed them out, Im sure. I look forward to reading you more.

Julian Speed
When you lie it's going to catch up to you sooner or later. I really dont understand how people think they can get away with this especially in this day and age.

As Obi Wan said "Everything I said is true, from a certain point of view." Ok loosely quoted but the point was made. I must admit at times of feeling inadequate I too have told that little lie to bolster myself in the eyes of those I thought were important. I look back on those times and laugh now at my bumps growing up. We have all done something to look better to those in a position of power and I can't say I regret those times. Times I was tested and fell short of believing that I had what it takes. As I get older I know who I am and know that what I want I can attain without that need to impress. And I have tried to raise my daughter that way. Small things like, I spent time on her name. Pure victory to the people of the mill. That is what her name, full name means. And her name is just as important as anyone else's. She should know that not only do I think she special but she should as well.
Get where you want to go, do what you must do and look at yourself and if that is good enough for you do even better tomorrow.
None of us are infallible but we are all people who are full of potential. I admire you for living up to yours. Thank you yet again for an interesting topic! :-)
Nford68@gmail.com