SIT ON A SCRIBBLE

Can you picture yourself living in this living room with that furniture? It's been created by the FRONT, a trio of Swedish designers, Lagerkvist, von de Lancken, and Lindgren.

Newsweek's art critic, Blake Gopnik, describes the artists, design concepts and technologies that are already changing the way we furnish our homes.

The Front designer in the photo is drawing a 3-D full size lamp in the air.

Using motion-capture technology from the movies to capture her movements, the film of her drawing is fed to a 3-D printer that outputs it as a " resin" object — chair, table, lamp. It may look like it's made of skeins of dried Elmer's glue, but it can be produced with other materials.

Yes -- you can sit on that chair, hang that chandelier from your ceiling, turn on the floor lamp, and sip tea on that table. (A chair from one of this group's first drawings sold at auction for more than $40,000, but now, Front's products sell for more normal prices, including a lamp for IKEA.)

This is the showroom of Martino Samper, an Englishman, who uses scraps of old stuff he finds in the street, and transforms

whatever he finds into decorative, interesting looking, usable seats on which you can rest, sit, relax -- desk chairs, rockers, 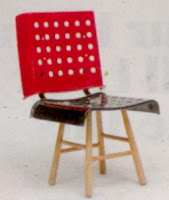 armchairs, all sizes and types of chairs. 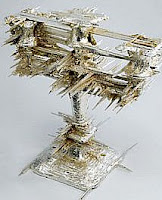 Meanwhile, Scottish Geoff Mann has created another technology that transforms light shapes into solid, tangible "art" -- a lamp shade, based on the pattern of a moth trapped in a normal light, created a sensation. More recently, capturing spikes of light from a fancy candelabrum, he made this piece on the right -- you can buy it for $27,000.

Mann has also materialized emotion. A table of china and crystal dinnerware was displayed at the Museum of Modern art last year -- as you watched it and listened to sounds of angry words, you could see the dinnerware contorting, as if emotion were a wind. 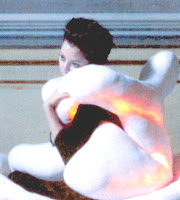 you can hug it, enjoy the heat which emanates from it, and enjoy the glow -- yes, it actually glows.

Damakersvan, a trio of Dutch designers, created another way to protect your land. 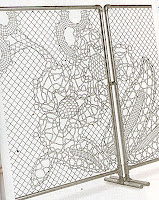 They transformed standard fencing into "lacy" fencing -- a cross between a barrier and a doily.

I am amazed by all these ideas.

Gosh, I remember when we, John Cullum and I, first began furnishing our loft, the top floor of the building which we bought later on.

John found the green leather recliner, the Danish style couch, Danish chair, and coffee table. I painted a pattern on the table and also on the wall above the couch -- a huge pattern -- I made it with colored chalk and Crayola crayons.

The piece de resistance -- the TV, a second hand one we bought from the Salvation Army for $5. (Yes, five bucks -- it got only two channels but that was enough.)

Maybe that's why the new technology that's creating a whole new look to your home fascinates me.

Will the "new" furniture catch on in America? Maybe newlywed, or unwed gay or straight couples, or groups living together, will be able to get an app for their cell phones, that will transform their empty rooms in to virtual palaces. And "virtual" will soon become REAL.
Posted by em's talkery at 4:00 AM

I think above all a chair should be comfortable. It should look good too but that is secondary.

The furniture made from scraps is so cool!

I really liked the Danish standard yard fencing.
The other furniture is interestimg from an artistic point of view. I liked Geoff Mann's lamp. Beautiful.
But for me, these days I look at furniture from the point of comfort and cleanability.
And at the prices asked for, it looks like I don't have to worry about buying.
For now, for my art, I still enjoy a sculpture, or a painting on the wall.
Louise Sorensen
louise3anne twitter

So amazing! I enjoyed learning about all this new furniture and designs coming out. But, I have to have comfortable chairs and couches and practical lamps and tables in my house. Some of it does look charming and would make great converstaion pieces. Thanks for sharing this up to date stuff! kam

Maybe footballers will buy them. They have a lot of spare cash.

As I read, SIT ON A SCRIBBLE, I couldn't help but think back about a conversation I once had with my old friend, Jerome. (Not his real name.)

A few of us had stopped by one afternoon to drink a few beers and help him break-in his new bachelor pad at the time of this particular conversation. He had just moved out of the comfortable home he had shared with his wife for several years and into a mobile home out behind his shop. (He was a cabinet maker.) The new pad was furnished in "Early Divorce". None of the furniture matched, and none of it adhered to any particular style. It was all comfortable and solid looking however.

Jerome was a large man; probably six-three and 240 pounds. He bore a striking resemblance to a young Fidel Castro and had a considerable charisma about him. I loved to watch him drink a beer. He'd pull a 12 ounce Bud out of the ice with his right hand, pull the pop-top off with his left, turn it up, and drain it without taking it down. Then, without shifting position, he'd crush the can into a small ball in his enormous right fist and sail into the trash can. Jerome was a man's man.

Getting back to my story, I eventually asked him why he had moved out and left his lovely wife. His answer still rings in my ears today. "Earl, you know I love that woman. I might fool around a little, but I do love her―always will I reckon. The trouble was that she kept getting' rid of all our good furniture and buying this dainty little stuff. It got to where I was scared to sit down 'cause I didn't want break somethin' Can't you just see my big ass sittin' in a little Queen Ann chair."

Jerome's dead and gone now, but he was speaking for a lot of men when he made that statement.

thx for info... keep writing and giving us an information... glhf for ur day!!!