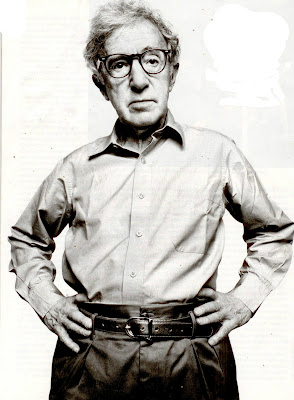 What a career! What an effect Woody Allen has had on my world! Friends rave, discuss his work as they reel off the names of his films, the names of who played what in his films, and what happened to so-and-so.

I skimmed an article about Woody that was written by Sam Tanenhaus, NY Times Book Review Editor, and studied the photos of Woody working with Penelope Cruz, Alec Baldwin and others in the cast of TO ROME WITH LOVE – his latest new film that just opened.

The NY Times critic said: “The legendary film maker returns to his old obsessions -- sexual avarice and megalomaniacal control.” The Hollywood Reporter and the LA Times said that Woody’s rehashing scenes we’ve seen and laughed at before, and they are no longer very amusing.

Has Allen become a creative genius who has nothing new to say? Has he run out of gas – become what I call a “once waser” ?

For me, Woody Allen was never very important or inspiring.. His first slapstick movies, BANANAS, and SLEEPER, that won him a cult following, mostly annoyed me. I liked ANNIE HALL, (with Diane Keaton) -- because of her performance, I've seen it a few times. 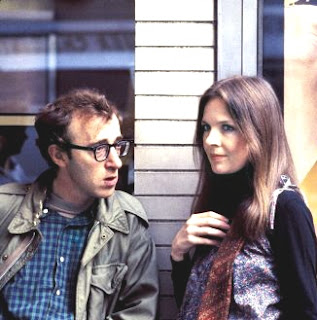 I didn’t love MANHATTAN, or the soap-opera-ish HANNAH AND HER SISTERS.

It annoyed me back then, and annoys me now, when Woody Allen is mentioned in the same breath as Stanley Kubrick or Francis Ford Coppola.

Hell, I’m not going to list of his successes and failures and what earned him awards. I um-um when our theater friends rave about Woody. I think he lucked into fame and glory because his psychoanalytic self was the storyteller, and psycho stuff was IN during the seventies, when Woody Allen was rising as a performer and movie maker.

I know I’m offending my friends and neighbors, who love old movies and musicals, and the actors who starred in them. Declaring I don’t love Woody is sinfully worse than saying Ingmar Bergman films bore me. Even the mess Allen made when he slept with his stepdaughter and married her, doesn’t really interest me -- it just annoys me, that the scandal made him more famous, more successful.

Why does his success annoy me? It’s jealousy, mixed with a sense of myself needing praise, and wise eyes on my work – needing help and artistic direction -- needing parents watching over me and helping me like Jack Rollins and Charles Joffee, the high-powered agent and manager team who helped shape the careers of Dick Cavett, Steve Martin and Billy Crystal, Lenny Bruce, Mike Nichols and Elaine May, Robin Williams, Robert Klein, and David Letterman. Oh my -- how Rollins-Joffee helped Woody, and Rollins, even now, watches over and supports Allen.

If Woody hadn’t had the ability to let himself be helped by outside eyes, would he be the legendary movie maker that he is now?

Right now, though his latest movie received mostly negative reviews, he’s already working on his next movie, hiring actors, working on the script.

I admire and am inspired by the gut in him, the thing in him that keeps him fired up, taking chances, reaching, creating – ignoring the success/failure issues.

Is it a gut for making money? Nope. Woody Allen needs to create like I need to write and explain why I don’t admire what he creates and deeply admire the thing in a man or woman that keeps them trying new things.
Posted by em's talkery at 4:00 AM

Appreciate your thoughts here, Em. I'm a Woody fan for a number of reasons: he always reminds me of my NYC past, I love his NYC mind-set. When Annie Hall came out I felt I WAS her and people stopped me on the street to say I looked like her. I run to a WA movie tovisit with an old friend. He makes his movies abroad b/c much cheaper. NYC super expensive now. Foreign cities invite him to film in their city and make it essy. He's much more popular in Europe than here.

I'm with you. I have been a heretic and never cared for Woody A. that much. I liked Annie Hall and Hannah (great actresses in both). Bananas and Sleeper had their hilarious moments. But after Annie, ho hum. I am a real heretic because I don't like the one that came out a couple of years ago about Paris. I love Paris, but I didn't get excited about that movie, and I didn't like the lighting either (light yellow for today, dark red for the past).

Maybe one day a black person will appear in one ofhis films. I won't hold my breath though.

Who argues with the comic genious critics?Woody Allen films have never been my favorite movie staple, but that's my personal feeling. They are generally well acted and well done, but they don't leave me with great lasting impressions. In many ways for me his movies, while well done, can be boring, and, as you suggest, his pseudo psychological sexual themes get a little old. He is actually to me a boring man. But who can argue with the critc geniuses? If they say he's great, guess he's great. :-)
Billy Ray

I hate to disagree with you Em, but many of Woody's films have been some of my all time favorites. I have also found several that I really didn't care for at all.
Yes, he has aways been very self indulgent, but a writer needs to draw on his or her own life experiences.
One of his lattest (of a year or so ago), Midnight in Paris, I find absolutely brillinat and I have seen it now a number of times.
One thing about him is that his movies have been so diverse. I think that is a sign of a great writer.

Interesting and informative blog today. I liked the movie-ANNIE HALL but Woody Allen's other films not so much. I always thought he was sort of pyscho and had lots of personal problems. I have nothing to rave about him/kam

Woody Allen is a name I heard in the seventies.
Having had to google his body of work, I find I haven't seen any of them.
Movies I thought were his, Rosemary's Baby and The First Wives Club, were only connected to him by the leading ladies, Mia Farrow and Diane Keaton.
So I haven't been a fan, I've only heard of him through his sexual shenanigans.
Regardless, he continues to make his art. Good for him.
Louise Sorensen
louise3anne twitter

Enjoyed your take on Woody Allen.

I'm probably one of the very few people my age who has never watched one of his films all the way through. I could never get interested enough in his stories, and I remember wondering just what all the fuss was about.

As you mentioned, maybe he was in the right place at the right time.

Honestly, perhaps I am naive, but I don't get Woody Allen. His dry and emotionless yet excitable routine doesn't resonate well. Perhaps it is the whole weirdness thin. He is talented and has achieved a status that rises far above many folks in the NYC movie market. But I don't get it. And probably never will.