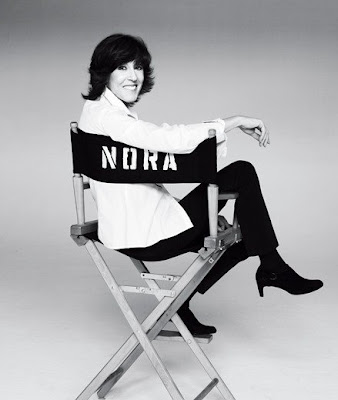 A wonderful tribute blog to Nora E. She gave the world so much good and beautiful things as we still see in her films. I watched Sleepless
in Seattle again and cried of course. Thank you
Nora for giving that moment of awe and wonderment in our hearts forever! kam

I love her movies and her books. Most recently I enjoyed her book "I Hate my Neck"

I was and am a huge fan of Nora Ephron. I read her books and saw all of her movies, my favorite being "When Harry Met Sally".

A few years ago in San Diego, I actually sat next to her while attending a performance of her play with music (by Marvin Hamlish). It was called "Imaginary Friends". It made it to Broadway, but flopped.

Sitting next to her was an amazing experience. She was so full of life and so thrilled with the performance. A smile never left her face.

She left during the curtain call and we never spoke...but still ..what a fantastic experience for me as I could so feel her buoyant enthusiasm for her show.

I was shocked beyond belief when I learned that she had died. We lost one incredible writer and one incredible soul the day Nora left us. May she RIP!

Ms. Ephron better be remembered years to come for her unique take on life. We have lost and incredible person whose words live on. Through her books. If you miss her as well, revisit some of her titles. Ereaders make that all the more easier or that.

I loved all of her films. A very talented lady. An interesting fact I thought that her parents were screen writers. They wrote the screenplay of Take Her She's mine and Sandra Dee's Character was based on their then 22 year old daughter Nora's letters home from college. Seems she must have always been an entertaining writer.

Great post Em, always nice to remember talented people who in their lives gave so much pleasure.