(VIDEO) WHY DO ACTORS WANT TO PLAY "LEAR?" 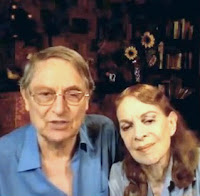 Like “HAMLET, Shakespeare’s KING LEAR seems to be a role that established “name” actors want to play.

Emily, who did an adaptation of this tragedy, modernizing the language, wonders what John’s thoughts are about it now -- it was a version of the play that John liked, but didn’t want to do.

John Cullum recalls how his passion and devotion for Shakespeare kept winning him wonderful jobs, important roles in theater. television, as well as musical comedy, in Knoxville, Seattle, Los Angeles, and New York.

He directed KING LEAR in Seattle, while he was playing “Holling the Bartender, in the television series, NORTHERN EXPOSURE.

He was ready to perform KING LEAR in San Francisco, and in Scranton, but Broadway commitments got in the way. John performs a small section of one of Lear’s famous speeches for Emily -- yes, it’s still a role he wants to play -- not in the Frankel version -- John Cullum wants to play the king in William Shakespeare’s TRAGEDY OF KING LEAR.

It's amazing to me the number of actors who have done and want to do Shakespeare. There is no denying the beauty of the language and timelessness of the stories.
But we rarely see these renditions anywhere but live theatre.
Maybe someday. Mr.S's work has aged well and has a wealth of exciting roles that never get old.
Louise Sorensen
louise3anne twitter

I'd love to be there when John finally does play King Lear.

I have seen many Shakespearean plays (as early as age 7, when I saw the Margret Webster Company's production of "The Taming of the Shrew", but I have never seen a production of "King Lear".

I did see John play Laertes on Bway in "Hamlet" so now I think it's time to see him play "King Lear".

I can't wait til John does King Lear! I could
listen and watch John perform all day and enjoy every moment....he is so commanding and elegant! Thanks for sharing some history of JC doing Shakespeare. kam

Lear is a difficult play for a young person to watch. Back when I was younger, I much preferred Hamlet and Macbeth. I bet I would be able to appreciate Lear much more now that I am older.

Who can resist the desire to play any character from Shakespeare ? It is similar to bring on a WoodynAllen film.... Part of initiation...