I am not a sound sleeper. But Mom was there last night. She needed something. I tried to argue with her -- convince her it wasn't necessary.  We were scrapping --yes -- discussing pros and cons and her reasons for feeling the job had to be done. I think it was shopping for something. I stated my reasons for saying NO nicely, but insisted the matter be dropped. We were exchanging ideas but it was not a happy conversation -- we were scrapping.

Golly, it was nice.  It was great, seeing her, feeling her energy even though she and I disagreed.  I miss her. I am sad, when I realize she is gone and not much attention is being paid to that fact.

I have a light on the shelf -- the high shelf above where I sit in my favorite chair at my computer. I note that the bulb is out. Golly, old style bulbs don't last, especially if you keep them on 24/7. The fixture is the one that sat next to Mom's bed after my father died -- it was there for the last decade of her life.

It's a "Yahrzeit" candle --it's a  Jewish tradition, to light a candle and keep it lit after someone dies.  My family never celebrated Jewish things or attended any church. My father came from a rabbinical family and rejected his Jewishness -- he said we were agnostics.  Mother's family was Jewish, but also, never celebrated any of the traditions.

Ah, but the year that my brother was drowned, and my father died -- that got Mom totally into all the traditions, including lighting two candles on the dining table every Friday night. (The Sabbath tradition -- "shabbat"  it is called.)

Mom didn't give me religion or faith or any belief in life after death -- the  beliefs that are important, and sustain so many friends -- beliefs you pass on to your offspring, which I couldn't didn't do -- I wish I had.

But Mom  gave me a renew-itself  body -- an ability to heal very very quickly, cuts as well as broken bones, and broken spirit too.  She gave me resilience.  I spring back. I persevere. Though I get down and discouraged, Mom somehow taught me -- gave me a precious power --. a keep-going, reinvent, I'll do better next time spirit. 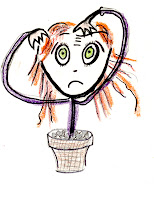 So why did she visit me last night?  Because Mom is me. The woman who visited me was an  aspect of myself. that continues to amaze me.  Depressed, not sure what to do or where to go, I was visited, and told I have to go shopping.  I was scrapping with me, sitting in my flowerpot, not wanting to take on anything new, grow or change or do anything that might make me uncomfortable.

Mom was annoyed.  Mom told me, "You have plenty of time."

I didn't want to listen, I covered my ears, turned away, got busy and pretended I was too busy to bother with what she was suggesting.

Mom said, "You can do anything -- that thing, that idea that's in the back part of your mind -- take it out, look at it, get to work."

That's what we were scrapping about. What's is this idea?  Oh, just something I sort of, maybe, possibly, might start working on -- shh -- verbalizing it now might jinx it.       . .

I found a new bulb.

Her light, my light is lit.

How beautiful Em.A beautiful tribute to the mother you remember and the thought provoking woman you have become.Bless you!

How lovely, Em, I think our Moms would have had a lot in common. She was my best friend. She, too, told me I could do anything. She was my first 'editor'. Love your tradition of keeping a light lit.

Just wonderful my darling Em. Yes they say that every character in a dream is actually ourselves...and there you were weighing the pros and cons of an idea....an idea that I suspect you will follow through with. YAY

As for your wonderful power to heal, both physically and mentally...I know all about that as well. I know stories you have told of of your horrendous accident years ago that many would not have fully recovered from. But you had the strength and the will to do it. You have the will to fight and conquer most everything and I love and revere you for it!

Wonderful loving tribute to your mom Em. A great story that touched my heart. Moms are special to us all. kam

Dear Emily, this is sad and beautiful! I have lost both parents for many years and feel all that you feel. I guess their spirits do stay with us long after they are gone. May your light stay lit and continues to illuminate the path that you walk.

This sentimental post is very good, Em. Our loved ones all live inside of us, even before they pass, but especially so, after. Unfortunately, most of my memories are traumatic, but I still have some fond ones, too.

Hi Em. We carry our loved ones in our hearts, regardless of our religious beliefs. I have found this to be true.
Big huggs.
Louise Sorensen
louise3anne twitter

My Mom was my best advisor, too...

EM, I miss my mom and paternal grandma daily. Not is a desperate way. Just in a loving -- 'I know that you are there', way. God bless em. Our beloved dead. God bless you (and John). The reason why we are able to communicate/write, etc, is because we are blessed with their input in our lives and the sweet memories they have left us. :))!

Saw this link on Twitter. I love this post. It is very relatable. We will never stop missing our moms, but you are so right. They are here with us! Thank you for the lovely thoughts. Hugs.

Em, that was truly beautiful. I have lost people, my father, my brother, but I am blessed to still have ,y Mum. She’s ninety one and amazing. She has a kind of energy about her that I can only imagine will always stay with us.Some people are like that….larger than life.

This was very touching Em. It is amazing how much of our parents we see in ourselves even when we don't want to admit it. I agree with your mom.... whatever it is, TRY it. Mistakes are lessons learned, therefore, useful. It would be a shame to let an opportunity pass you by! Life is about trying and doing and living and learning as wel go :D