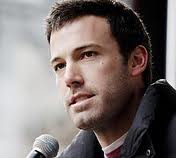 Joel Stein, a Time Magazine columnist, in his recent four-page spread, said, "A decade ago Ben Affleck was a tabloid fixture.  Five years ago he was a fledgling filmmaker  Today, he is the force behind one of the the year's best movies."

Joel Stein is 39, a commentator on the younger generation, who's become a writer star to watch.  And 43-year-old Jennifer Lopez, Ben Affleck's girl friend in 2003 and 2004 -- when they were headlines as "Benifer" --  has become a super star.

Joel is a sexy, good-looking man. I call him "Joel," though I don't know him, but because -- in his writing -- he's told me so much about himself. I feel as if he's a personal pal. Undoubtedly, a lot of Time's readers feel the same way -- he's gotten to be a bigger and bigger name in the magazine. And Jennifer Lopez -- wow -- she keeps expanding, taking over more in every area -- performing,  directing, creating, selling her advice on fashions, diets, cosmetics, and her private life.

The private life of Ben Affleck -- married to actress Jennifer Garner, Daddy to their three kids -- he's carefully handling all this nowadays, in the same way that he is currently handling his career as an actor. 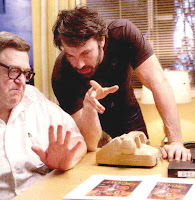 He said that he chooses films to act in, based on the what the film itself is about, and explained that he studies the message, as well as the character, feeling out if it interests him. He does the same thing, applies the same standards, when he's reading scripts, looking for his next directing project.

He says he gets focused, gets energized, by the essentials, by what makes sense to him.

Hmm.  I note, in myself, that my energy goes toward approval -- more readers, more Tweeter followers, more Facebook likes -- as if THAT will prove that what I'm doing is successful, in the way that my parents thought of success. Success meant making money, being a recognizable name. (They were very proud  of me when I began to be listed in books about Modern Dance.)

Hmm. Isn't that what Jennifer is doing?  And Joel is doing? Their projects are reaching ever larger audiences, vaster markets, and are making them more money -- Jennifer is raking it in, and Joel now has a huge following on Twitter.com.

Ben isn't doing that. He's brushing aside success and approval, doing what he calls  the "essentials."

Gee, what I am doing makes less and less sense to me. What makes sense (to me) is to work harder --  doing has become an essential.

Ben is showing me and maybe you too -- focus on what's fundamental; central. absolutely necessary; important to you.

The question to ask ourselves:  Are we growing?  Or are we surrounding ourselves with insurmountable walls of doing -- doing this or that, and more and more till you bump in a wall, fall back, and get up faster so we can keep doing, doing, doing?

Oops -- I think I've gotten caught in doing an out-of-date, silly, dumb dance -- what was it called -- the "boompsi daisy?"

Artists are creator, they create in many area of life. They should be the true leaders of the world, not the politicians. :-)

Good tribute blog to Ben the actor. I really enjoy his films and activities. He is keeping his mind focused on the important things in life as a big star. thanks for posting. kam

I am not at all familiar with Joel Stein. But then, I don't read Time. I am a big fan of Ben Affleck; not just as an actor, but as a thinker.

I have seen him several times on HBO's Real Time with Bill Maher. Ben is very political and perhaps someday he might cash in on that aspect of himself. Of course I like his political views,because they match my own. :-)

I also like the way he is handling his career as well as his personal life.

I wonder if that whole "Bennifer" thing taught him a lesson or he has just grown up and is more sensible now.

As for "Jlo"...I have never liked her and suspect that it was her PR people who were behind "Bennifer".

I think she has very minimal talent,but a whole lot of ambition. Not my cup of tea at all.

For me, this blog entry resonates on so many levels. Everyday, we as humans, seek approval. Many of our simple decisions revolve on acceptance. When we choose what to wear on any given day, to the choice we make at a restaurant at night, it is all in how others perceive us. My goal is not to be accepted nor how to be different, it is just to be.

Look at Woody Allen. While I disagree with many of his lifestyle choices, he owns them. He has a picture that is panned he owns. He dates and then marries his adopted daughter, he owns it. That is why I like real people. They still succeed in life, even when they fail. They prove they are human.

Isn't that what we all are?