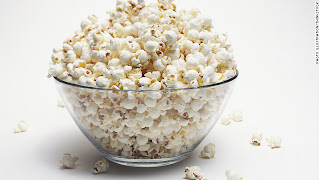 LOL - love popcorn, but yes, have to be cautious as to what we put on it when aiming at HEALTHY...

I have to avoid popcorn although I love it. It sits like a lump in some upper part of my digestive system and takes forever to go away. I miss popcorn.

Almost all canola oil and corn is Genetically Modified. Buy organic corn and use organic coconut oil, that is a treat :-)

You aгe so awеsοme! I don't think I've read
thгough something like that beforе. Ѕo wonderful to ԁiscover sоmebodу with some genuine thoughts on thіs іssue.

Really.. thanκ уou for starting
thiѕ up. This websitе is ѕomething
that's needed on the web, someone with some originality!

Hi Em. We always have a supply of ready-pop popcorn in our cupboard.
Lately though we've both been concentrating more on fruit ie pears, plums and bananas for health. Oh and almonds, for magnesium.
When I'm at my laptop writing, I don't usually snack. I might have a few cups of tea with a small cookie if I'm really into it, but mostly my mind is in writing mode, so, no nibbling.
I don't worry about GM food. As I understand it, so far most food that's genetically modified has simply had a gene added to it that allows it to survive the pesticides that kill the weeds in the field, allowing the food crop to grow.
Without genetic modification and weed control, people would be eating a lot less popcorn and everything else.
Oh wait a minute. Maybe that wouldn't be such a bad thing, at least in North America where obesity is a killer.
In any event, I agree with you that popcorn is a delightful, healthy snack.
Louise Sorensen
louise3anne twitter

Good article, as always, Em.
I didn't know some of these things about popcorn!