HAVE STRAD, WILL TRAVEL

Will Joshua Bell become a household name -- a Bernstein or a rock-star like Dudamel, the famed Venezuelan conductor and violinist? 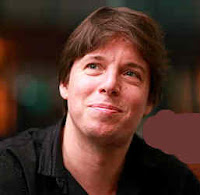 On this man's face, I see a sense of humor, strength of mind, an I am what I am confidence.

Right off the bat, she asks Josh why he doesn't wear a tux, and he explains that the necktie you wear with a tux, sits exactly where his violin has to sit. Belinda asks why he can't wear a turtle-neck. Josh says that a turtle neck implies a wrong generation.

Yes, Belinda's easing into the chat, but I'm ho-humming. He doesn't seem like the kind of interviewee that needs careful coddling.

On Belinda goes -- to his Gibson Stradivarius that's worth $4 million.  She wonders how he protects it when he's traveling.  Joshua Bell explains that security for it is a secret he doesn't want to disclose -- "A Strad is like traveling with a baby. You watch over it, all the time."

And his fingers -- does he protect them? Yes -- though he does most domestic activities, he avoids using a knife -- slicing vegetables is OUT.

Finally, Belinda comes up with a question that relates to his art,  Ten years ago, Bell played Bach in a Washington, D.C. subway. How did that affect him? Did it start his real career? It was certainly picked up, photographed, written about in many newspapers.

Joshua let her know it was a PR gimmick. And it worked. It got him on his way to bigger and better engagements.

Since Joshua Bell was a child prodigy, he has had many ideas about how to teach a child to play a violin. Belinda asks how he manages to take care of the three sons he lives with, sons he had with an ex-girlfriend. Joshua said that he sees them five times a day and shares things "wonderfully well" with their mother.

(Five times a day? That got me wondering if he was exaggerating a little.)

The most important subjects -- how he fell in love with music, and would he encourage a child to try and be a professional performer -- they weren't discussed.

Here's most of the Time Magazine interview:
What wakes me, shows me the artist -- it's Joshua saying when you've poured your heart and soul into a big piece, and fans come back and tell you how touched they were by the little flashy piece you played. Yes, "poured your heart and soul into it" -- when you love your craft, you become IT -- the music -- you soar and go above and beyond YOU -- it's a transcendental, astounding, glorious concentration, a concentration I know from dancing. Here's Bell pouring his heart and soul into it with the Royal Stockholm Philharmonic.
And here's this wonderful artist telling us what in his heart and soul, as he's playing. .
Posted by em's talkery at 4:00 AM

Great blog about JOSHUA BELL...what a genius! I love listening to the violin and he plays so wonderfully and magical....warms my soul and lifts my spirit. Thanks for sharing Em. kam

I play the violin but nowhere near the level of Joshua Bell. He is quite extraordinary and a perfect example of what it takes to be a success. Practice, practice, practice! You can see when he plays how he just loses himself in the music - he doesn't even need to concentrate, it just flows out of him. Beautiful, mesmerizing, his "heart and soul" and love for his craft, certainly do shine through.