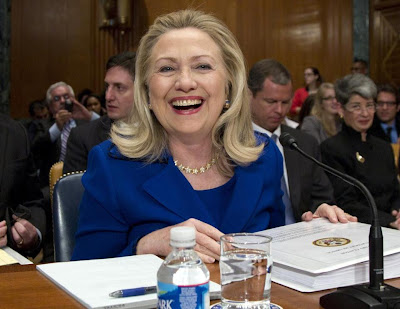 Great photos! I have a great respect for Clinton - it will be interesting to see if she runs and if so how it turns out - I tend to shy away from 'dynasties' aka Bush Sr. & Bush Jr. with #3 still in the wings, but we'll see when election time rolls around again.

I love watching Hillary and how she changes. I kind of hope she doesn't run for president, because it will be so exhausting and difficult, and I feel protective about her.

Great tribute blog to Hillary Clinton. I think she is the BEST! I hope she runs for president and wins. I admire and respect all that she
does. She is a tower of power and positive ideas and has a huge following of people supporting her ideas. Thanks for posting this.
kam

Now this is a woman that I have a lot of time for. Both she and former President Bill Clinton have been great friends to Ireland and I've always listened to her speeches when she's here. At one stage, there was a rumour that she was going to be the next American Ambassador here. To me, she is the embodiment of the phrase, "Behind every great man is a great woman". She is probably one of the smartest First Ladies that America has every had and I would love to see her as the first female President...if only to have Bill as the First Husband. :D

Mrs. Clinton is a strong woman. I think she is rather odd. But personality aside, her future in politics is powerful. I said once in a blog response that I think she is not my cup of tea. I may have been premature. This woman is growing on me. Perhaps she will lead us soon.