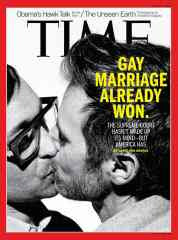 This is a very tricky subject. I don't want to offend my gay friends or straight friends, males or females.

This Time Magzine cover made me very uncomfortable.

I looked at it for a second or two.  I looked away quickly and guiltily.

I thought "Yay for the Gay Marriage " -- glad that Time declared it had already won. In my mind there is no question that gay marriage is liberty and justice for all in America and the rest of world.

Turn back the clock, and remember how people used to stare at black and white couples walking down the street, who were holding hands, or looking at each other adoringly.

Yes, back then, I stared at black and white couples. Also, I personally experienced being stared at as I walked down the street with Clay, a very dear guy -- black, tall, very handsome -- he was a dancer in my Dance Drama Company, and especially helpful to me as an artist.

I am sure, as time passes, two men kissing (or women kissing) won't be noticed or perturbing, or make straight men or straight women uncomfortable.or uneasy.

So liberal, liberated Em, even with a show business background was discomfited by the men kissing. Saying it, stating it, admitting it tells you what you (perhaps) already know. We need to see it, and adjust to seeing it, see it often enough so that men kissing is nice to see -- like it's nice to see lovers enjoying together.

But in case you too, are discomfited, I'm sharing my instinctive reaction -- a something or other sort of cringe.
Posted by em's talkery at 4:00 AM

When the people who found same sex relationships uncomfortable were in the majority, the LGBT community asked for tolerance and acceptance. Now that the societal perspective has changed, will those who still find them uncomfortable be the ones to beg society for tolerance and acceptance of their viewpoint?
I am personally uncomfortable with any overtly sexual display in public (whatever the couple) but I do feel strongly that if any viewpoints are to be tolerated, ALL should be. I don't think any apology on your part is necessary. If something makes you feel squeamish, it is your right to feel that way. Mine, too.

It's very brave of you to admit to your feelings about this, Em. Personally, I'm not uncomfortable, I guess because I've been around so many gay men in my life, but I do remember those first few times I saw men kissing, and yes, it did make me feel a bit odd. Now, I think it's beautiful!

As an aside, my son-in-law is black, and my granddaughter is biracial, so I am very sensitive to that area too, and SO thankful we have (mostly) moved beyond the stigma of interracial couples.

The same will be true of gay couples, probably sooner than most of us think. This snowball is rolling FAST downhill!

Like you say, you just have to get used to it, and you will. The picture didn't bother me, but I might do a double-take the first time I see it in real life.

Interesting blog today, somewhat disturbing. I find women kissing more disturbing than men for some reason. We have as a society come a long way since I was young. I remember when my older sister started dating guys and the first thing my parents would ask her-is he white? I am happy for the gays-yes they have won and the limelight is on them now. I guess I was brought up old fashioned. I will learn to accept pictures of gays kissing, it will just take me longer. kam

What an honest post Em and I agree with your conclusion--we need to see it. I too grew up in the dance/theatre/performing arts world and in that world became accustomed to "public displays of affection" between men so the Time cover didn't get much of an eyebrow raise from me. However, one PDA issue I feel strongly about for all couples is to keep your affection at a publicly decent level. Keep your private life private and all will be well. Great article!

Living out in the country, I don't see a lot of people of any kind kissing, except maybe on tv.
To be truthful, I'm a little uncomfortable seeing a dog slobbering over anyone's lips if it goes on too long. But that's life. Love is love.
Two men kissing? Happy to see it. Long time overdue.
May we all think nothing of it as soon as possible.
louisesor.wordpress.com
louise3anne twitter

I read your entire blog, and have to agree with your feelings; it makes me feel a little uneasy as well. Let me start by saying I am a straight man, married to a woman, and a Liberal, who supports Gay Rights for men and women.

When we see two people kissing, usually of the opposite sex, we project ourselves into that scene. If it’s a handsome man and an attractive woman kissing, both men and women could imagine themselves with either of the couple, if they are straight.

We often project ourselves into a scene whether it’s a movie, TV show, theater or photographs. It’s a common fantasy for everyone, in my opinion.

It may be something we need to get used to, as straight people, by simple exposure, and it should have nothing to do with the fact that we feel, as Liberals, that it’s OK.

Then again, there are folks that firmly believe that what two people do, who are in love, to each other should remain private and not for public display, and for these folks I think the cover would be especially disturbing, and may be behind, in part, of Time’s reason for choosing the photo for its cover. Boring photos do not sell magazines.