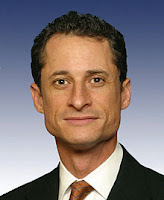 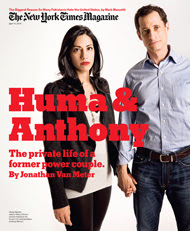 No, Em, I wouldn't vote for him, as he has already shown us what power does to him. IMO, power is a very strong corruptive force, and difficult to defend ourselves from.

If you read between the lines in the recent NY Times Magazine article, he's running because he wants to keep his feet in politics and he has leftover campaign money that he has to use up soon or lose. I think he's just priming himself for a run for Congress.

I totally agree with you Em! The man has a sex addiction, which could easily resurface at any time.

I am a former New Yorker, but my heart is still there. I would not feel secure with Anthony Weiner as my mayor either.

His actions certainly didn't show a lot of good decision making or technical skills. But look at Bill Clinton. Tiger Woods.
Fact: men like sex. Some men like it more than is good for them.
I think you should assume that most people are making asses of themselves every time they have the chance, and if you are looking at a plumber, look at his plumbing skills. If you are looking at a politician, what are his political accomplishments?
Unless of course the job can put a person with sexual judgement problems in close contact with their temptation. ie Doctor, Dentist, Teacher, Priest, etc.
You have posed a very good question, Em. It's always a pleasure to think through your challenges. : )

Oh, no way I would vote for him. A man who would do what he did has some major problems. Add on the fact that he has a GORGEOUS wife and still did that? Please. Morally reprehensible, offensive, egotistical, needy... doesn't sound like someone who should be running the greatest city on earth, in my opinion. And I like Bloomberg. :)

Sometimes people forget that they are animals and get all indignant concerning the fact as they gaze into the terrible crystal and become aware of that evident reality through the actions of others they've never met. In other words: Yeah, I might if I was able. I thought we were a forgiving lot; maybe not? People are complicated creatures; multifaceted messed up little monsters at times and then they change into something that seems quite alright. I know of a man who's lived in a hole in the ground since I was a kid in the sixties. I'd vote for him before this guy but this guy might actually be alright too?

I saw the offending photo at the time and, at least he was wearing underwear over his, erm, display. But I agree with you, Emily.﻿ What he did wasn't a "simple mistake". It speaks to a much deeper psychosis. If he had owned up to it at the time, I might've had some respect for him but he lied about it, claimed innocence etc. until there was incontrovertible evidence. Even my own children know that if they do wrong, being caught out in a lie about it is far worse than the actual mis-deed. I wouldn't trust him to be in public office, at all.

That's crazy. Therapy can't fix that kind of loose screws. Trusting him to run NYC is a joke.

I wanted to write a response here that was funny. I refrained. However, I will say that what Mr. Weiner does on his own time is his business. As a public figure he does have a responsibility to maintain a certain level of morality and good behavior. Higher than say you or I. I also think his behavior was made public by him, therefore, he made it our business. As a political figure, he should have been smarter. I know that everything I put in a text, on the Internet, in a chat room, no matter how brief, may be used against me. I try to remember that despite my insane need to speak my mind. Weiner should give up the political arena and focus on a different are of his life. My vote, if I had one, would not go to him.