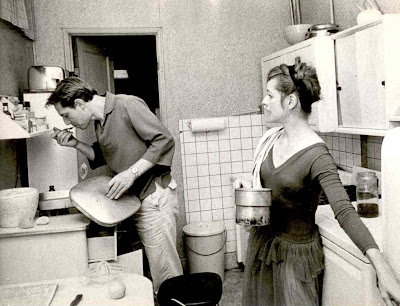 Love the picture of you and John fixing supper.
There seems to be too many things nowadays to worry about. I don't fret about any of it-just live life to the top instead. Life is too short to worry about this stuff. Thanks for posting and don't worry Em-life goes on! kam

What a great picture. I recently got one of these new-fangled non-stick-pans. Different from the old ones. I love it.

There is cookware out there that doesn't carry a beware beyond it gets hot when heated :-) I'll share the URL if you like. It works great, I don't use teflon anymore :-)

I eat free range organic eggs with no attention on the dangers of eggs that do not exist!

Have a great day. @Poet_Carl_Watts

Every since I heard Baz Luhrmann's "Sunscreen Song" way back when, I took on board his advice about tackling problems one at a time. No point worrying and fretting over what may or may not be. Just take things as they come.

What was that guy's name who said that, "Everything solid melts into air"; you know? Well, he was right of course and though The World is still devoid of a singular consciousness welded together by almighty love; we have a chance, I believe. Faith that fosters only kindness and compassion are the skills that we should be sharing with one another; leading by example.
I love the word, (umpteen)! Thanks for that one Emily; nice usage, helped me to smile for a while.

My cookware that I currently use was purchased by my mother when I was born. It is made by Farberware. I love it and decades later it looks as new as the day it was purchased. No Teflon, no silicon, no clear lids, no special coating, just plain old cookware. I am sure as I am writing this that my Farberware will most definitely survive many more decades. Older is better.