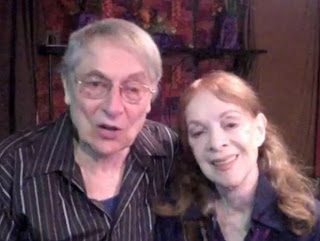 He has no "knock on wood" traditions" but confesses that on opening nights, he sweats.

Describing what a stagehand noticed him doing before the opening of a Broadway musical, John reveals how Richard Burton staved off the jitters on opening nights.

I don't have routines either but I get very nervous before going on stage. I can't eat before a show. Afterwards, I'm famished. I also chuckled at your opening music of "Pictures at an Exhibition" because our symphony orchestra is on-stage right now rehearsing that for a performance next weekend. Cheers, Stephan

Interesting and fun video! Enjoyed hearing John tell about his actions and routines before opening night and auditions. The squeakie board and Richard Burton's way of coping with stress made me smile. I can remember my jitters opening night of Hello Dolly and Wizard of Oz. Good memories. kam

I used to teach computer classes to groups of adults. I always had a bulleted "script" of talking points, and even when I knew the script well, I would go over it carefully before each class. I also was kind of nervous, even before classes that I had taught many times before. But once I stood up in front of the class, I relaxed completely.