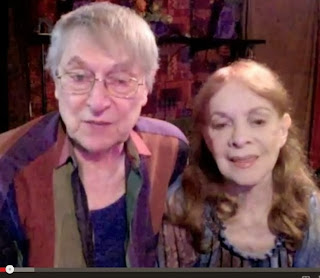 "As you started out, whom did you want to be like, as an actor?" Em asks.

John admits that like most actors, what he saw in films affected him profoundly. Though he names some of his favorite movie actors, his thoughts turn to the plays he was in, when he started acting in Knoxville, Tennessee.

Acting in various American plays, it was the roles he played -- the words, the ideas that the great playwrights set forth -- that inspired him.

John Cullum says, "The play is the thing" that excites him, and interests him, keeps him going as an actor, more than anything else.

I count John Cullum as one of the greats. Burton would be in that list too. I adored Burton as I adore John.

Sadly Burton's addictions to both alchohol and Elizabet Taylor did not help his later career.

Those he named such as Brando are are all on my own personal list of the greatest actors of my lifetime.

John was inspired by some terribly wonderful people and we have been all the richer for it.

Great video! Enjoyed hearing John tell his acting stories and make us feel his energy that makes him such a great actor. He has worked with the best and yet John stands out above them all. Thanks for sharing a few moments in John's acting career. kam

I would agree with the other two comments as I happen to think Mr Cullum is an excellent actor who has brightened many an evening's viewing. I'm only sad that I don't live in the right country to see him on stage. But, yes, the play's the thing. If asked this question, my father would say Leslie Howard in Pimpernel Smith! I was so jealous of my parents for having been around to see the likes of Olivier, Gielgud and later Burton on stage. They saw the latter in The Lady's Not For Burning. Having said that, I did see Gielgud and Richardson in No Man's Land. Have a good week!