I saw Yoko Ono's name and thought, "What's she doing now?" Every so often, with some attention-getting declaration, she pops into the news.

I've resisted paying attention to her. Is it because of the outrageous lovemaking photos of her and John

Lennon?  I wasn't a prude back in those days, but it seemed as if they were advertizing themselves. And she was wedging her way into Beatles history and the art world, based on her relationship to Lennon.

I read reporter Lily Rothman's "!0 Questions" interview in Time Magazine. It's about Yoko's book "Accord" being published, and her new album, "Take me to the land of Hell." Though I am not a fan, part of my brain tells me that she's an extraordinary woman with extraordinary power and energy,

Watching the video of the interview, I liked the quietly confident, practical way Yoko Ono supported art, creativity, and peace, and liked her promoting ways of using oneself to help the world remain a world that we can live in.

Enjoying the bright-voiced girl who conducted the interview, I found myself more interested in the girl's crisp speech, directness and charity, than in what the 80-year-old, worldly-wise Yoko was proffering, in her very quiet voice. (Tuning up the volume when Yoko spoke, I wondered if it was the microphone, or her way of getting an audience to pay extra attention to every word she uttered.)

John Lennon's love for this woman -- it is still vivid -- his being murdered at age 40 -- how he was changing everything about his life before his death, collaborating with Yoko, moving away from the Beatles, apparently doing everything he could do to make her happy as his wife and artistic partner.

In the video, the tersely eloquent, 80-year-old Yoko looked not young, but not crinkled old or even elderly as she told us how optimistic she was -- told us she was brimming with wonderful ideas and plans.

While the interview rolled on, I Googled -- skimmed what some critics said about her new album, and other albums," and listened briefly to her girlish soprano in a few videos -- unmemorable melodies, rather over-simple, poetic ideas. What I noticed was 42,000 to 57,000 people had listened to them. Were they her fans, or did they listen because John Ono Lennon, (he changed his name to that) adored her. Maybe listening to her songs was a way of revering him?

Hey, I remember actress wife Trash Van Deere and the great George C Scott -- an evening
we spent with them in his sprawling Connecticut mansion. Beautiful, overly passionate Trish making herself the center of attention during cocktails and dinner -- preaching her politics, reminding George to walk the dogs, getting him to show us the front page photo of her in the Washington Post, ruling the un-rulable George, who was, at that point, drinking a quart of vodka a day.

Did I like her? Well, she didn't' connect with me, or mention the film script based on my novel "Splintered Heart," that I'd sent her, suggesting she could star in the movie.

Is Trish-George, why I am not interested in Yoko's projects? 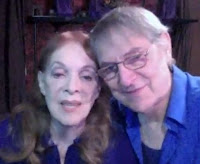 Hey, I'm the wife, blogger, making video's with my celebrity husband whose name and background wedges me into the theater world, and gets me status, more attention than if I were just me.

I read this to my husband.  John Cullum said strongly, "Em, what you do is important for what the blog and videos say and do."

Here's the 10 Questions video. What do you think?

I've admired Yoko for a long time, (although I'm not really a fan of her singing usually :) ) , and I think this is a wonderful interview. It is also inspiring to see a woman of eighty saying that age is "great," better than seventy even! I think many women don't come into themselves until they're thirty-five or forty, which is kind of what happened to me. I was busy being "the mom," "the wife," etc. and neglected being "just Julie" for a long time. I hope I can be inspiring like this one day.

It must be very difficult, living in the shadow of someone who is famous, even if you are famous as well. I think Yoko had some growing pains with that in the beginning, but she was young and still needed to find her way.

John is right, Em, what you do IS important! You have much to say, and are an inspiration to many--including me--yourself! The fact is though, I probably would've never even found you, if not for John, because I did a YouTube search for him, and found your blog videos. The two of you seem to have a very equal partnership, as I believe John and Yoko did.

Thanks again, for sharing your thoughts with us!

I very much enjoyed this Em.I have often entertained similar thoughts about the wives under or over their husbands wings and in a way I think its all ok as long as it is done in mutual understading and respect.John Lennon was my favorite Beatle and if this woman inspired some of his greatest solo songs then she must have magic in her.
Have a lovely day :)

Like you I didn't like Yoko Ono for a long time, but have appreciated her more in recent years.

Liking aside, I look at what happened with her arrival on the scene.

The Beatles broke up and John got killed.

Do I think she was responsible? Yes.

And she can not sing.

However, she is probably doing the best she can now and back then. I still hold her responsible.

Have a great evening

I always liked her from the first time I knew anything about her and found it fascinating how much emotion she stirred in people since I was a kid in the sixties without even really knowing anything about her. I just knew that whatever it was that I was hearing negative about her was based on some kind of a selfish response to her involvement with John and the subsequent transformation of their lives together. Even I could see that they were a team, single minded and content. I appreciate all that came before they all branched out into new work but that stuff I hold most dear is the aftermath of The Beatles. If John was here he'd probably say something like; "Change the wall paper already!" sez Dustspeck