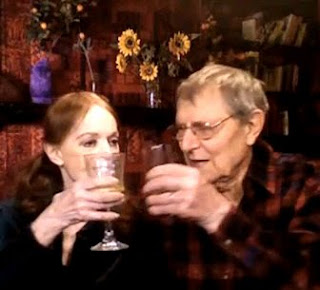 Emily Frankel, as each year ends, has asked John Cullum about his  New Year's resolutions.

John as usual, has hemmed and hawed  until Emily has announced something wifely -- that she'll has resolved to cook more dinners for him.

Yes, here's our resolutions -- plans for corn bread, dinners, projects  and leisure back in 2011. Change the number, dear friends. And resolve with us, hope with us that we'll have fun fulfilling them in  2014.

Loved it 3 years ago and love it just as much now!

Happy New Year to my daling Em and John!

Don't forget the black-eyed peas. Happy New Years to you both.