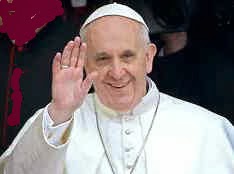 I don't go to church. I don't have a religion.

Though my mother was Jewish, my father, who was born into a rabbinical family, was proudly, rebelliously an agnostic.

He explained what that meant to me when I first asked about God. We were living in an all white, Christian suburb of Chicago  where no Jewish families resided. I was an outcast in grade school. One day, the girls attacked me on the playground, yelling "You're a Christ killer -- you Jews killed Christ." Afterwards, on Sundays, I went knocking on the doors of various churches hoping to enroll in a Sunday School. I was rejected by Lutheran, Protestant, and the Christian Science Church, probably because when they asked about my parent's religion, I declared, "I am an agnostic."

So the Pope is not my father, leader, teacher, or guide. I think of the Catholic Church as a huge corporation with vast power to rule and affect opinions. I was impressed by Blessed Pope John Paul, but never felt connected to him  and didn't like Pope Joseph Aloisius Ratzsinger -- he seemed like a not very holy politician.

Nevertheless, I pay attention to what the Catholic Church is emphasizing, but the celibate priest sandals, and the anti gay stuff offend me, and what they say about abortion and contraception collides head-on with my logic -- it's as if the Catholics are saying the world is flat, when we know, beyond a shadow of a doubt, that the world is round. 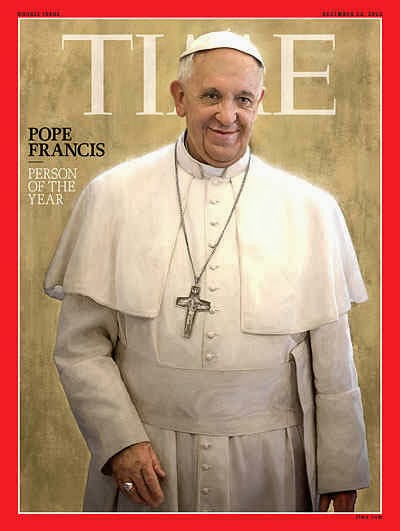 But Pope Francis -- everything he says and does affirms these words that he has said: "I'm one of you, nothing more than you -- a person -- a friend that wants to cheer you, help you in any way that I can."

Nancy Gibbs, Managing Editor of Time Magazine who named Francis as Person of the Year, wrote about him beautifully: "He released his first exhortation, an attack on 'the idolatry of  money,' just as Americans were contemplating the day set aside for  gratitude and whether to spend it at the mall."

Gibbs said:
"He lives not in the papal palace surrounded by  courtiers, but in a spare hostel surrounded by priests. He prays all the  time, even while waiting for the dentist. He has retired the papal  Mercedes in favor of a scuffed-up Ford Focus. No red shoes, no gilded  cross, just an iron one is around his neck...
"When he rejects the pomp and  the privilege, releases information on Vatican finances for the first  time, reprimands a profligate German Archbishop, cold-calls strangers in  distress, offers to baptize the baby of a divorced woman whose married  lover wanted her to abort it, he is doing more than modeling mercy and transparency. He is embracing complexity and acknowledging the risk  that a church obsessed with its own rights and righteousness could  inflict more wounds than it heals."

Pope Francis himself has said, "Don’t just preach; listen, Don’t scold; heal." And referring to a battlefield, says, "The church is a field hospital. Our first duty is to tend to the wounded. You don’t ask a bleeding man about his cholesterol level."

I like this man. He seems like a manly man who is addressing agnostic me, including me when he makes suggestions. I like his smile, his tone of voice. He's doesn't seem like a King or a CEO who's front and center in one of the world's richest most powerful corporations. I feel as if I visited him, I wouldn't be out of place -- he's truly a father, teacher, friend, and guide -- I can listen to him and still be me.

I picked this video because actions speak louder than words.

Pope Francis took that name in honor of St Francis. I did a long research paper on St Francis many years ago, and for a long time I would think about what St Francis would do in any given situation. It's wonderful that the Pope has decided to use St Francis as a model.

Excellent Em! You have voiced precisely how I "feel" regarding the "new" Pope. Religion and "the church" escaped me during my trek from teenager into adulthood. My sensitivities inclined me to reject any "teachings", especially those seemed more organized around the tithing of one's finances rather than nurturing of one's soul. Raised as a Southern Baptist, I was actually taught to judge others- whether it be their lifestyle or their religion. And, judge we did. Catholicism was an easy target , whether it be through each new Vatican dictate or Vatican "cover-up" (especially so with shuffling of pedophile priest.). Mother Teresa was the only thing I admired as I felt she was "real". Her interest lay not in the interest of the Vatican and it's dictates, but in the people that actually were suffering. Until her passing in 1997, she truly walked the talk and without question, deserved her Sainthood. None since has touched my sensibilities or sensitivities- from ANY religious realm until I began to learn more of the new man in charge - Pope Francis. You nailed it with "I can listen to him and still be me." There is great power in that statement Em and I hope the "politicians" within the Vatican realize the power they REALLY HAVE at their disposal now...and use it wisely towards the betterment of all mankind. Kudos to you Em- one of my favs for sure.

I am an atheist but I must say that it's about time that someone stepped forward from that establishment and began leading their flock in "Christian" principles. Too bad however that the fundamentalist Christian radicals don't do the same. Great article Em.

Dearest Em.......so sorry that your early life was filled with religious rejection instead of inclusion. After all, as a Catholic child we were talk inclusion above all else, to embrace the differences among ourselves vs. the sad problems you were presented with.......Nowadays, I don't really practice my religion per se, but still remember so many of the lessons of Catholic School......I can tell you that I find an person's religion one of the least important aspects of his or her overall persona, in terms of friendship, romance, etc......I applaud this edition of Em's Talkery for your openness and honesty.....Love and Blessings to You and JC, Your Loyal follower, Jim

Some say St. Francis was a mad man because his values ran opposed to the norms of the existing society of the times. Maybe we need more mad men?