Bill Gates, guest editor of the January 15, 2018 Time Magazine, an issue chock-full of hopeful events and optimistic people who are doing good things for the world, told the magazine's readers:

"Reading the news today does not exactly leave you feeling optimistic. Hurricanes in the Americas. Horrific mass shootings. Global tensions over nuclear arms, crisis in Myanmar, bloody civil wars in Syria and Yemen. Your heart breaks for every person who is touched by these tragedies. Even for those of us lucky enough not to be directly affected, it may feel like the world is falling apart. 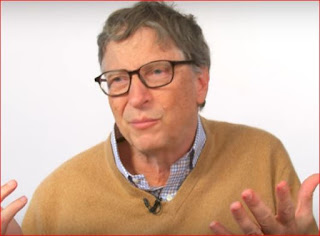 "But these events—as awful as they are—have happened in the context of a bigger, positive trend. On the whole, the world is getting better.

"This is not some naively optimistic view; it’s backed by data. Look at the number of children who die before their fifth birthday. Since 1990, that figure has been cut in half. That means 122 million children have been saved in a quarter- century, and countless families have been spared the heartbreak of losing a child.

"And that’s just one measure. In 1990, more than a third of the global population lived in extreme poverty; today only about a tenth do. A century ago, it was legal to be gay in about 20 countries; today it’s legal in over 100 countries. Women are gaining political power and now make up more than a fifth of members of national parliaments—and the world is finally starting to listen when women speak up about sexual assault. More than 90% of all children in the world attend primary school. In the U.S., you are far less likely to die on the job or in a car than your grandparents were. And so on.

"I’m not trying to downplay the work that remains. Being an optimist doesn’t mean you ignore tragedy and injustice. It means you’re inspired to look for people making progress on those fronts, and to help spread that progress more widely. If you’re shocked by the idea of millions of children dying, you ask: Who is good at saving kids, and how can we help them do more? (This is essentially why Melinda and I started our foundation.)

"So why does it feel like the world is in decline? I think it is partly the nature of news coverage. Bad news arrives as drama, while good news is incremental—and not usually deemed newsworthy. A video of a building on fire generates lots of views, but not many people would click on the headline “Fewer buildings burned down this year.” It’s human nature to zero in on threats: evolution wired us to worry about the animals that want to eat us.

"There’s also a growing gap between the bad things that still happen and our tolerance of those things. Over the centuries, violence has declined dramatically, as has our willingness to accept it. But because the improvements don’t keep pace with our expectations, it can seem like things are getting worse.

"To some extent, it is good that bad news gets attention. If you want to improve the world, you need something to be mad about. But it has to be balanced by upsides. When you see good things happening, you can channel your energy into driving even more progress.

"That is what I hope you will take from this issue of TIME. I’ve asked some of the people I respect most to write about what makes them optimistic.

"You’ll learn surprising facts about the state of the world, and you’ll meet heroes who save lives every day. It’s a crash course in why and how the world is improving. I hope you’ll be inspired to make it even better." 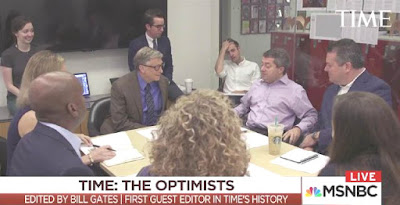 Thanks Bill Gates for giving us these strong good words.  It's a never-to-be-thrown-out issue of Time Magazine.

The issue included:
"The Kids Will Be All Right," by Warren Buffet.
"Defending The Dreamers." by Lawrence Powell Jobs.
"Girl Power" by Malala Yousafzai.
"What Men Can Do To Help Women," by Bono.
"Precedent for Change, Time For Hope," by Avan du Vernay
"The March Forward," by Melinda Gates.

Born in 1955, William Henry Gates, age 62, entrepreneur,  author, philanthropist, with his friend Paul Allen, Gates founded and built Microsoft, the world's largest software company, and  became one of the richest men in the world. With his wife, the Melinda and Bill Gates foundation has  given $35 billion to charities.

The trouble is, we can't deny climate change and what that will lead to.