Back in the days when we counted every penny and ate apples, chuck steak and rice, I started using canned peaches and discovered that chicken was cheaper -- very tasty when I added vinegar and a little Sweet & Lo.

JC bought me a cookbook, but measuring and following directions -- oh dear! It was like tap dancing as far as I was concerned -- too many steps, more intricate than "shuffle, hop, ball,change," and everything had to be done exactly as prescribed. 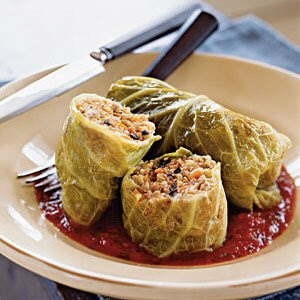 I decided to make Hungarian stuffed cabbage. I saw my mother make it and knew the routine. Buy a large cabbage, gently remove the leaves, carve off the spine of each leaf, boil them briefly. Gently lay them out on a clean tabletop. Mix ground hamburger, egg, salt pepper and garlic powder, white rice (steamed in oil and water) and half a can of tomato soup, roll a small handful of meat into each cabbage leaf. Add another can of tomato soup, cover and cook for couple of hours.

In HEART CITY, Installment D, page 57 -- heroine Hally makes it when she's trying not to think about infidelity. But I have fun making it, dancing around the kitchen, making the sauce thicker with tomato paste, tangier than Mom's, ultra sweet and sour.

In my hold-onto-every-penny days, I realized I could do Chinese, Hawaiian, depending on what vegetables, what pan was available. We had a large 20 inch square electric fryer with a heat control dial, that enabled me to use it as if it were a wok.

Got nervy, bold. Without a second thought, using a second large pan, I made dinners for 8, 10 or 12 friends, with them sitting on the floor, plates, utensils purchased at 14th street Salvation Army store; jam jars and paper cups were what we used for water or the wine our friends usually brought.

Got bolder -- what I liked was unexpected guests. When JC's family came to New York for a Baptist convention, spur of the moment I concocted a meal for 22 Southern Baptists, Em style Chinese/Hawaiian, added pineapple, cashews, and tangerine segments to the meat and vegetables, plus vinegar, soy and sweetener, on top of a mountain of rice. Dessert: I piled the Southern Baptists into my Ford Truck Station Wagon, and took them on a tour of Harlem, pointing out beggars, drug sellers, prostitutes, and ramshackle dwellings -- am proud of that -- shocking, surprising them with the other side of the city.

My cooking has developed. I can cook almost anything just by tasting, and noting the colors -- French, Latin, Far East Indian, American Indian. John likes to make rye bread in the Cuisinart he bought us for Christmas, and every so often good old southern fried chicken, in between my latest experiments with scallops, calamari, melon, walnuts, and saffron rice.

What is this cooking talent? Sometimes dinner's so delicious that my guys say you ought to open a restaurant.

No, I don't want to open a restaurant. My cooking is like my blogging, a little of this, a little of that -- a feeling spur of the moment -- off I go, traveling where I feel like going, making a feast. Word feasts and food feasts come from the same thing -- big curiosity and a lot of nerve.
Posted by em's talkery at 6:59 AM

Email ThisBlogThis!Share to TwitterShare to FacebookShare to Pinterest
Labels: early background, private self