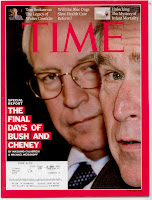 Two familiar faces; heads nestled together, one head whispering in the ear of the other. The two buddies ...

I haven't forgotten the past eight years of George W. How can I? Can you? We can't forget till a lot of stuff he messed up has been fixed.

I couldn't watch G.W. on television -- I changed the channel -- didn't want to hear him, or see that look on his face -- little boy showing Mommy and Daddy what a righteous, good son he is.

But we elected him, put him into the White House, even though the articulate, experienced Gore probably had more votes. And four years later, even though we knew Kerry would be a better manager for our country, we let G.W.'s pals, his father's pals, and swift boat ads, win G.W. his second term.

And Cheney ... I never liked him or trusted him. Did you? And now we wait to see if these two heads will be punished, in any way, for their infringements on our constitution, their promulgating spying, invasion of privacy, and water boarding torture.

... two heads on the cover of "Time" ... I can almost hear Cheney whispering, telling G.W. what to say, what not to say to the media.

George W's good deeds: "No Child Left Behind," cut taxes for every taxpayer, prescription drug benefits for seniors, implementing free trade, improved air quality, doubled support for veterans; his global HIV-AIDS initiative, getting Roberts and Alito into the supreme Court. And the war, our endless war in Iraq.

Cheney brags about how he helped shape Bush's war on terrorism, and the seven years we've had, with no further 911 attacks. And now, instead of whispering in G.W's ear, he's out there, in the news everyday -- attacking, undermining our president and everything the Congress is trying to do.

And undoubtedly, Cheney's guiding advising his daughter to do more, say more, keep promoting the Birthers claim that Obama isn't an American, that Obama is a racist -- silly, ridiculous stuff, filling the ears of needy, vulnerable Americans, and vacillating Democrats, and the floundering Republicans.

Those two heads on the cover -- what they've said, what they're saying now -- get them off my cover, out of the papers, off the TV! Publicity creates trends, copy cats and copy cat crimes, and more and more death disaster news ... enough, enough, enough already!
Posted by em's talkery at 5:35 AM