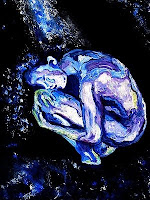 I am an anxious sort of person, and a worrier. It doesn't matter what I'm doing. As a writer, I worry more than I did as a dancer -- I used to worry about pirouettes, but conquered it by using acting techniques. Writing a new post for my blog is nerve-wracking. I know what's on my mind, but am often not sure how to pull my thoughts together and make a point. It can take 3 to 7 hours to write a post and I'm tense while I'm writing.

When I'm cooking -- even if I'm cooking a ten course meal for a group of people -- I'm relaxed and confident. Other domestic jobs are also easy, but I get tense because I want to get them done -- be done with them fast.

Recent articles about anxiety state that many anxious people unconsciously cultivate anxiety because they're used to feeling anxious, and are comforted by their anxieties.

Psychologist Maya Tamir tested a group at Hebrew University, and learned that those who called themselves "anxious" invariably chose to feel worried before a demanding task.

At the University of Denver, Brett Ford, a psychology researcher, discovered “Trait emotions” (feelings people tend to have most of the time). “Trait anger” means chronically angry, irritated, or annoyed; “trait happy” means usually cheerful, joyful. Both types of people preferred to feel the way they were accustomed to feeling

Neuroscientist Kent Berridge, at the University of Michigan, discovered that wanting and liking are mediated by two distinct sets of neurotransmitters. He concluded, “Some people get addicted to feeling anxious because that’s the state that they’ve always known. If they feel a sense of calm they get bored. They feel empty inside. They want to feel anxious.” (Notice he didn’t say “like.”)

Do you worry? Are you generally anxious? Here are three tests. The questions seem boringly standard, but my test-scores confirmed my own evaluation of myself as a worrier.

What's your evaluation of YOU? Do the tests say you're evaluating yourself realistically?

IF YOU THINK YOU ARE DEPRESSED TAKE THIS TEST

TAKE THIS MORE THOROUGH TEST
Posted by em's talkery at 4:00 AM

Frequently I get depressed and bored at the same time. Next time I will try welcoming the feeling because it means I'm not anxious.

How interesting. I took the long test and it says I am NOT an anxious person, but I consider myself to be one.

I am a born worrier, although a lot less so than I used to be in some ways. I know I am a lot calmer than I was years ago, yet I always worry about the silliest things. So, either your test is wrong, or I am a lot less anxious than I think I am. Thanks Em!