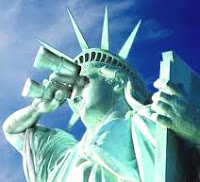 Should we be afraid of Muslims?

Many Americans blame all sorts of wrongdoings on Muslims. Even before last September's hullabaloo over building a mosque across from the World Trade Center, anti-Muslim feelings were common. Since then, Muslims have been attacked, defamed, and rejected by many of their neighbors.

In Congress, the House Homeland Security Committee is currently having hearings on "the terrorist threat in the United States," and "the domestic radicalization of American Muslims."

Though I'm amazed and touched by the non-violent revolution in Cairo, I can't help but wonder what will happen as Egyptians formulate plans for a democratic government.

Hmm ... "Hamas," an extremely violent group, proudly claiming they are an offshoot of the Muslim Brotherhood, continues to threaten God-knows-what, to the homes and lives of the Israelis.

"The threat is real, the threat is different, and the threat is constant," Holder said recently, referring to American terrorist suspects, who have revealed a chilling dedication to Jihad.

Last week the New York Times ran an op-ed column titled “What the Muslim Brothers Want.” The author, a senior member of Egypt's Muslim brotherhood, cites Turkey as a model of good government for having, like the Iranian government, --"a good president like Mr. Ahmadinejad, who is very brave."

Whoa! That's the guy who proudly says there was no holocaust and his country has no nuclear weapons.

Who and what do I believe? On three Internet sources, I read references to the Muslim tradition of lying about their own faith to conceal its true nature – a practice known as "Taqiyya."

Is what he says Taqiyya? I don't think so.