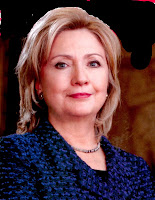 Secretary of State Hillary Rodham Clinton, says her mission is to put women and girls at the forefront of the new world order.

I pay attention to Hillary. While she's been growing up, so have I, so I'm all ears. What she's been through, you and I have shared -- not specifically woman-to-woman shared with Hillary herself, but nevertheless, you and I have experienced a lot with her.

(I have pictures in my mind of young Hillary -- the eagerness, the expectancy in that face with the dark eyebrows that made me realize that she was bleaching her hair, and so many other pictures of other Hillarys.)

She's been talking about women and girls -- how important a focus it is for her, ever since Tunisia -- and during a very recent broadcast from the State Department, Hillary said, “I believe that the rights of women and girls is the unfinished business of the 21st Century.”

Gee! That's a big blanket statement -- more than a statement --it says to me, "hey, she's talking about YOU."

Two years into her tenure as America’s 67th secretary of state, she has out-traveled every one of her predecessors -- flown 465,000 air miles and visited 79 countries. Her Boeing 757’s cabin, stocked with a roll-out bed, newspapers, and a humidifier, now serves as another home as she zooms between diplomatic hot spots, tackling the wars in Afghanistan and Iraq, tensions with Iran and North Korea, the Arab-Israeli peace process, and, now --one after another -- the Middle East upheavals.

She's defying jet lag, though her hoarse voice and bleary-eyed look occasionally remind me that she is not leading the life of the former first lady and senator from New York, the female presidential candidate whom we were ready to elect until Obama overwhelmed us.

And she was never the loser in the presidential race. She works with him and for him, and now, wow -- she has declared, "Human rights are women’s rights and women’s rights are human rights once and for all. As long as discrimination and inequities remain so commonplace everywhere in the world, as long as girls and women are valued less, fed less, fed last, overworked, underpaid, not schooled, subjected to violence in and outside their homes—the potential of the human family to create a peaceful, prosperous world will not be realized.”

That's more than a mouthful. I'm digesting that -- nodding --aware that she's more at ease with herself, more relaxed lately, despite her schedule. Even her constantly changing hair style and her choice of tailored pantsuits convey that she's happier, more comfortable with how she looks.

Do you feel the new Hillary -- rounder face, warm smile? Am I imagining that her smile is warmer somehow?

Our State Department’s 2012 fiscal-year budget request includes $1.2 billion in programs specifically targeting women. Though it's been announced that $832 million will go toward global health initiatives, it can't be analyzed item-by-item and compared with previous years -- the State Department only started tracking women-focused dollars in 2010.

Are we going to see Speaker of the House Boehner and snarling Republicans demanding State Department budget cuts? I have my ear muffs ready, and I suspect that most of my friends have them also.

Clinton says she is currently moving the discussion beyond a reliance on her own celebrity, and making it international. At the State Department, her goal is reflected in a new and sweeping strategic blueprint known as the "Quadrennial Diplomacy and Development Review." QDDR.

I hate acronyms. I try not to use them. I am using QDDR because it's an important, long-term idea.

By institutionalizing QDDR , Clinton says she hopes her successors will continue what she has started. She has stated, unequivocally, that she wants this effort, this work, this goal, to continue and expand beyond her presence. in the State Department.

Will Clinton stay on in a second Obama term? Will she make another White House run in 2016? Bill Clinton joked recently that his wife now covets the title of grandmother far more than that of commander in chief. Where is she really heading? Well ... Do I know today where I'm heading? As Hillary's evolved, so have I. I am attached to her -- we have grown up and are growing older, growing wiser together.

Hillary Clinton sticks to her word. She has said, quite a few times in the past few months, that she is getting ready to take a break from public life. Asked whether she worries her eventual departure from the State Department will endanger the future of her mission, Clinton admits that she's feeling a great weight of responsibility.

She said, "It is why there are 133 references to women and girls in QDDR. It is why I mention the issue in every setting I am in, and why I mention it with every foreign leader I meet." Hillary goes on cheerfully, “It is like any challenge. You just keep at it, take it piece by piece, seize the ground you can, hang onto it, and then move forward a little bit more.” She pauses. “And we are heading for higher ground.”

I got it. Okay, things may happen that move her in other directions or a different direction personally, but I'm convinced.

I am holding onto Hillary Rodham Clinton's powerful, wonderful words about the rights of women and girls being the unfinished business of the 21st century.
Posted by em's talkery at 4:00 AM

She said unequivocally the other day that she doesn't want to continue into Obama's second term in any capacity. I wonder what she's going to do. I bet she starts a foundation like the Gates Foundation dedicated to saving the lives of women and girls around the world.

Hillary is a global treasure!

Emily, I agree wholeheartedly with the idea of evolving along with Hillary. As she continues to come into herself, we as women must do the same.