What in the world is Kate Middleton, Prince William's bride-to-be, doing in that dress?

I learned that Kate Middleton wore this dress in 2002. It apparently got Prince William focused on her. To me that tidbit of information says William is/was a Dodo bird.

Just so you know for sure that I'm insulting the Prince, the Dodo (Raphus cucullatus) was a flightless bird, related to pigeons, around 3.3 feet tall, about 40 or so pounds. It lived on fruit, and nested on the ground. It has been extinct since the late 17th century. So the word Dodo means "obsolete, out of common usage or practice -- to become a thing of the past."

I admired Princess Diana, but her sons -- well, William is definitely a Dodo, and probably so is Harry. I exchanged 4 emails with Prince Harry a few months ago. (For an explanation, see the final paragraph of this post.)

About the black see-through lingerie in the photo -- Kate Middleton wore it in 2002. It was NOT in style. It is not very flattering. Kate is reasonably slender but definitely not slender-waisted, and probably (the band across her chest is very flat looking), not bosomy. Her legs are good but I knew that before I saw her in this outfit.

Actually, the black gown suggests she has NOT GREAT taste -- it's just a semi-sexy nighty. Why would she wear it? Did she know the Prince was attending the gathering? (It was a benefit, some fund raising party.) I mean, if she knew he was going to be there, and she wanted him to see her, we know that she's got a feisty, aggressive spirit hidden deep within her average English girl's soul.

I doubt if we'll find out who Kate really is for a couple of years. After their April 29 wedding at Westminster Abbey in London, they'll be heading to North Wales where Prince William is stationed with the Royal Air Force. (Of course, paparazzi details will emerge, but we, all by ourselves, are asking and answering the IMPORTANT question -- have they already slept together?

Based on looking up this question, and the abundance of simpering, non-answers Google gave me, I'd say no. But, I came across this photo of condoms and an advertisement: 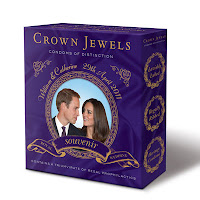 "These Royal Wedding souvenir boite de capotes ' combine the strength of a Prince with the yielding sensitivity of a Princess to be. In the heat of the moment be sure you don't rip open the box, as it is a 'timeless souvenir heirloom collectors box' that contains a 'collectible portrait!' "

Will I be following news alerts about their guest lists, their gifts and Kate's wedding dress? I'm not very curious, but now that I've wondered about them sleeping together, I'll glance at the television.

We don't have royals to follow. We have some presidential daughters, but we haven't heard that Chelsea is pregnant, or heard anything about Amy Carter. Obama's daughters are out of the limelight, thanks to Michelle. Another potential daughter would be Bristol P., but I don't like the look or the sound of her, and any thoughts about a presidential Sarah Palin are dismaying.

FINAL PARAGRAPH: I got Prince Harry's email address from a FB friend, who was sending Harry pictures of American girls. Harry liked me for about 12 minutes.(figuring that he spent three minutes on each of the four email exchanges we've had. He knew I was married to John Cullum, and Harry read my blog once. He answered my last email. "Excuse me. I have an appointment with the Prime Minister " (No, I am not kidding. It was not a hacker. The email came from Buckingham Palace. I still have Prince Harry's email address. I am not a Dodo -- you never know when an email address might come in handy.
Posted by em's talkery at 4:00 AM

Of course they have slept together! ;-)

The Prince Harry email story is just amazing. And you thought your blog didn't have readers!