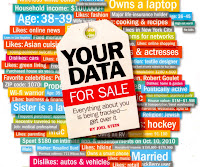 It's a big deal -- privacy -- "that state in which one is not observed, not disturbed by others, where you have freedom from public attention." 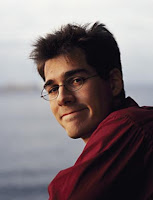 I call him "Joel," though I don't know him, but, because he's told me so much about himself, I feel as if he's a personal pal. Undoubtedly a lot of his readers feel the same way -- that's why Joel Stein is getting to be a name as a columnist.

Joel has a rambling, jabbery, amusing tongue-in-cheek writing style. In his stream of conscious prose, he tells about wanting to be famous, his wife, their kid, his sex life, dreams, possessions, his personal schedule, purchases, shopping, his confusions, angers, fears -- this guy talk/writes uninhibitedly about anything and everything that crosses his mind.

(I can't help thinking that the current to-do about privacy has been bolstered by what Joel himself does as a writer.)

He began as a writer-researcher for Martha Stewart, became sports editor for Time Out New York, and joined Time Magazine in 1997. It's not a hugely impressive resume -- he appears on the "I Love the '80s" TV show -- he's co-produced three TV pilots -- he's taught "humor in writing" at Princeton University.

He moved to LA for a while and wrote a few attention getting articles for the Los Angeles Times. In January, 2006, his column, "Warriors and Wusses," stated uninhibitedly, "It's a cop-out to oppose a war and yet claim to support the soldiers fighting." And he didn't support our troops in Iraq. The article won him quite a bit of attention and fans.

Two years later, another Joel Stein column, in the Los Angeles Times, "How Jewish is Hollywood," created a furor. Mentioning that the Anti-Defamation League poll showed 22% of Americans believe that "the movie and television industries are pretty much run by Jews," Joel wrote, "The poll just shows how dumb America has gotten. Jews totally run Hollywood." Boom-ditty boom -- this column bothered a lot of people and also won him fans.

Last July, in a Time Magazine column, Joel wrote about his personal discomfort with the immigration of Indians and what they've done to his hometown, Edison, New Jersey. It upset the Senator from New Jersey and many New Jersey-ites -- and certainly increased his readership -- no doubt about it -- Joe has a big talent for shocking, bothering, and attracting folks.

I was a faithful Joel Stein column reader till he wrote, at length, about his two day vacation. Joel turned off his laptop, un-plugged the Internet, TV, iPods, GPS, and was astounded, shocked, by how much he wanted to check his email, and be twittering and Facebooking throughout the day. When his vacation was over, Joel thanked God for technology, and swore he'd never voluntarily disconnect again.

Finding myself ho-humming, I stopped reading his twice monthly column in Time. It's too much him-him-him, and his sentences often have to be re-read a couple of times in order to find a verb.

Okay -- re: Joel's "Your Data for Sale" cover story -- there's plenty of information that relates to our concerns with "privacy." Now I know that there are ten major data mining companies. That's scary. Matt Fertik, the CEO of Reputation.com, within three hours of Joel's phone call to him, had Joel Stein's social security number. That's scary.

Joel's article tells us that mined data about us is sold for two-fifths of a cent to advertisers. Most data is collected from your laptop or your cell phone, by tracking cookies and the apps you download. It's cheering to know that Senator John Kerry is trying to pass a law to protect Internet users, and to learn that the Federal Trade Commission wants to get browsers to provide a do-not-track option for their subscribers.

Yes, we have been losing control of some personal data, but it's the monster-under-the-bed syndrome. It can be fixed by checking under the bed. You can undo what you've permitted on Facebook in your account privacy options. (Joel says Facebook doesn't bother selling private information -- most advertisers have FB accounts and can just access your profile.)

Yes, Google is hurting you -- your searches, online purchases, data you've entered in gmail, You Tube, blogger, picasa, buzz, calendar, and maps, creates privacy problems, but you can pay Fertik, at Reputation.com $8.25 per month and he'll clean things up for you.

Has Joel, who naked-izes himself constantly, created a brave-new-world baloney furor? I think he probably has. He suggests that you protect yourself on Facebook by mixing in some false facts, doing it inconsistently -- it'll confuse and incapacitate the privacy invaders.

I say if you are vomiting private stuff on Facebook and you're tweeting intimate thought -- slow down. Say less. Fix your privacy settings but restrain yourself. You can tweet and have sexy fun facebooking, shopping, info searching, but if you're feeling naked -- well -- put on some clothes.