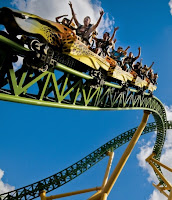 Daredeviling was never for me. I rode the Tornado roller coaster at Coney Island once, and never again. And I never did the parachute jump. I love riding in helicopters, though. That's not daredeviling, it's like being a dragonfly.

Haven't been on a roller coaster lately because of my heart but I can remember the thrill! Life can sometimes be like a roller coaster and you have to learn to buckle up, hang on, laugh, and scream alot! Lol! Also, be sure and catch that Kodak moment with your mouth wide open and arms up in the air!
kam Kathleen Ann McGee

WOW!!! What a first date!!! Can we assume that JC also parachuted as well? You are one brave lady!

When I was a little kid my greatest pleasure was to ride in the FIRST car (all alone) on the Roller Coaster. Okay it wasn't the huge ones like you mean. I think it was called Fairy Land and it was in Queens,NY. Not only did I ride once, but I would ask my father to let me stay on for MANY more rides. I loved it!

Today, there isn't enough money in the world that could get me on one of those rides.

Yes I also loved the Ferris Wheel as well...but the Roller Coaster was my thrill of choice.

How great it is to be a child and to be so fearless! What happens to us in life that we often become so much more fearful of certain things? Yet actually in some ways become a lot more fearless in other ways?

I guess it has to do with experience and knowledge. I now know that those rides can be (though not as a rule) dangerous, for one thing.

Work that calls for swift response, unknown outcome of your intervention can give you a 'rush' of adrenaline. There are some individuals that perform best when the pressure is on and they're doing what they've been trained to do and do it well. The adrenaline 'rush' keeps them sharp in doing the task at hand, but it can have a rebound effect on the body. I define,'Dare devil', as someone who is an extreme risk taker, not necessarily trained or having any control of outcome. They usually are seeking attention or a high from taking chances without skill/or training seems a bit self-serving. Just my opinion on the topic. xxxxooo H.