The frequent photos and articles about Princess Kate evoke memories Di. One can't help but compare the smiling, confident, gracious Kate with Di.

Diana's death was shocking, and the reaction of the world to her being gone still continues.

I was channel surfing, restlessly -- I clicked on a pleasant voice talking about Diana, and saw a clip of her talking at a conference about anorexia and bulimia.

Instantly, I was riveted. She was so truthful, believable, poised, gracious and f

ocused on the audience after she was introduced, focused on the children -- it was a clip about Diana raising funds for various charities -- we saw her focused on whomever she was helping, with her presence -- helping to raise funds.

Truthful -- in every shot an unadorned truthfulness -- nothing that was artificial, exaggerated -- simple truthfulness.

The tribute continued and went into a photo history of Diana before she and Charles were officially engaged, then her wedding, her honeymoon days, and official visits the Princess made with her husband -- Charles, invariably remote -- Diana always reacting to what was being said or displayed, relating to the other people and the situation. 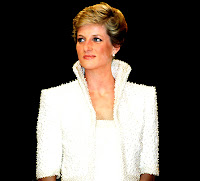 The power of truthfulness -- the power of a person -- girl, boy, man, woman, old or young -- a person just being what he/she is. She was civil, gracious, and understanding, remarkably sensitive and intelligent.

Kate Middleton, Britain's new Princess, is civil, gracious, graceful, very much there, on the moment at the moment. Still, I squint a bit, I study her, I don't quite believe her. Maybe because that's all I've seen -- poise -- and I sense that she is very aware of the camera, the eyes of the world on her, and she is behaving impeccably well -- the way a perfect princess ought to behave.

Kate hasn't been in our lives for many, many years. We haven't seen her age, or change very much -- she was just a bit thinner for a while, which made us wonder if she was dieting. With Prince William, she behaves perfectly, looks quite perfect, smiles, waves, acknowledges everyone around her, always perfectly, and yet -- I don't think we've ever, not yet, met the real woman.

I like her. the world likes Kate -- and yes, I sense that she knows that, and that's an element too, that makes me study her perhaps a little too critically. My Lord, what she took on -- a family, a husband, a whole lifetime of royal behavior and tradition. She's working at it wonderfully well. She is lovely and graceful and bringing popularity, perhaps, back to the royal family.

But ...
I think we miss Diana because wasn't always perfect. She was what she was.

What can I say! Princess Diana was the most incredible woman. She is a true princess in every sense of the word. When I was younger, i was in awe of her and even had her 'haircut'. I thought she was an incredible role model for young ladies. Despite her shortcomings, she stood as an example for those who needed a hero. Someone to strive to be. One to learn from. Even with her issues with food, she still stood as a platform for those who perhaps could have learned from her.

The Duchess serves the same purpose for young ladies today. She is simply the most elegant and worthy of the title of Duchess. Kudos to her for being the role model of today.

I adored Princess Diana and her death affected me greatly. She had imperfections as we all do and it is true that this is part of what endeared us to her.

Excellent post, Em, I think you nailed it - we don't know her yet.

Princess Di was and still is loved by everone. She was a grand lady with a mission to reach and help others less fortunate around the world. I cannot compare Kate with Di. Kate is beautiful and doing well, but there will only be one Princess Di. kam

I think you nailed the difference in the too. Diana was interesting. She seemed more like us and less like royalty. Diana seemed to be that princess you saw on television who wanted to bust out of the palace and live life the commoner. Dance, get drunk, laugh uncontrollable. Her care for the world seemed to evoke a grace only held by Mother Theresa and of course Jesus Christ.

Kate, I don't know and I'm not so interested in. Even as a man with more knowledge and understanding of the world. I don't know if I see in her eyes what Diana had, or it's likely that I don't care at all. She just seems to be one of those princesses who is looking to satisfy the likely future king and play her role in the family. Perhaps she'll age and come into her own.

Also, even with all the attention the old-newly weds are getting, the crowned prince, Prince Charles is still alive and well and the great mother and Matriarch of the family hasn't cashed in her lease on life. Charles should likely have been king by now, but his dear old beautiful mother with all of her intelligence, whit, and charm simply will not croak fast enough to allow him his seat. He'll likely buy it before she does, making it almost certain that his son will take the throne. William seems to be the first King of Great Britain in a long time.

Kate is under a lot of pressure to be perfect. And she has Diana as a predecessor. All things considered, I think she's doing remarkably well. @louise3anne on twitter

Diana captured all our hearts―even my own―cynic that I am.

I think it was the vulnerability, combined with a sincerity that can't be faked. Her shy smile always reminded me of Jackie K. Never forget that clip of Jackie speaking Spanish when she and JFK were in Mexico. We never got enough of Jackie, and Diana sort of took her place.

When I think back about the videos of the night Diana was killed, I get a sad and sick gnawing in my gut. The rerporters killed her, plain and simple.

I don't even have a mental image of Kate―that kind of stuff slides right off my brain these days―but I have the general impression that she is very media savvy. When everything you do or say is planned, and for the camera, nothing is real and it shows.

Kate is a Duchess not a Princess :( But I can remember the day of Diana's funeral. We waited for her funeral car to pass on the very outskirts of London before she travelled to her final resting place in Northampton.

I was devastated when Princess Diana died. I remember watching everything unfold on TV and then when they finally announced that she had passes away, calling my Mum and Dad in the UK to let them know as this had all happened while they were sleeping. I felt that Diana and I were kindred spirits- we were the same age, only 3 days apart actually. And I used to look at her and be able to almost tell how much she was hurting and struggling. After doing many years of genealogy I was surprised to discover that according to www.onegreatfamily.com I am her c2nd cousin 21 times removed!! LOL I know that doesn't get me anywhere but it makes me feel that we were connected somehow. I think she was a wonderful, compasionate person who was making a difference in this world and who was taken much too soon.