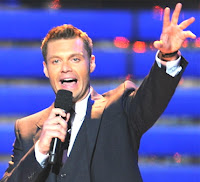 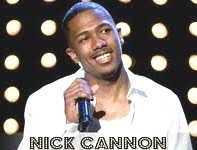 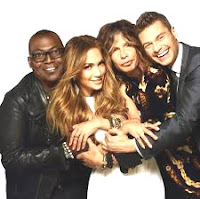 All those jobs you've had, JD -- hundreds of shows, thousands of auditions -- all the efforts, study, rehearsals -- all the aspects of things you have done to keep going -- like Ryan and Nick, you just have to keep going, and do more and more. And more. It will pay off. Pay off or not, JD, the work of your work makes you the best you can be, makes you truly an artist.
Posted by em's talkery at 4:00 AM

Truly I like them both, very good natured individuals but I don't watch any of those talent shows. Stopped watching Idol after about the 3rd season, can't stand the redundancy of it all. However, it is staggering to think thy Seacrest makes in a month my financial goal for retirement if I ever had to be a normal guy for the rest of my life haha! But he is behind other reality shows that I sometimes watch. Guilty!

I like Ryan and Nick as hosts of shows-they do make you feel welcome. Does Johnny Carson count as a host? I could watch him all day long and feel welcome and happy.
Interesting blog about their bios and how much they make. Makes me feel very poor though. Lol!
kam

I'm afraid I don't watch many of the talent shows, so I'm unprepared to give an opinion here. It is amazing though, when one thinks about how they must prep for these shows and the talent it takes to put oneself out there. Cool JD is out here in Albuquerque playing the accountant in "The Lone Ranger" -- Just a few miles from here. Hope he's enjoying our rugged and beautiful state

Very nice message to JD. From what I can tell, he is a hard worker, dedicated and consistent.

I think Ryan is our new Dick Clark. He is youthful, looks good, and eternally talented.

Once JD finds his niche, success will come. Temerity is key.

JD is stunningly handsome and being the son of both Em and JC, he has to be oozing with talent and charm. So why not go after jobs like that JD? No one ever heard of Ryan or Canon before their jobs on TV.

Okay, Ryan is also on E Entertainment News and covers the Red Carpet events. He was doing that before anyone ever heard of American Idol.

AS far as Cannon. Frankly, I barely know his name. When you mentioned that he is also Mariah Carey's husband....then the name rang a bell.

I am glad that these guys are earning small fortunes for not doing very much. That is the way life goes sometimes...while JD is out there auditioning and occasionally being cast in something.

Its a very tough business as we well know.

Here's to JD and success!

i'm not a fan of ryan seacrest. he comes off as a pompous prick. i remember when he was on 98.7 here in los angeles in the last 90's/early 2000's. he hasn't changed, which i give him credit for. he's remained the pompous prick he's always been. this is the man who brought us "keeping up with the kardashians". now i admit i watch the show. how can you not appreciate a train wreck? its like passing an accident on the freeway. you're seething because traffic is at a halt, and you have a feeling its due to an accident, yet when you pass it, you can't help but wonder what the hell just happened, and why does everyone, including me waste their time? that's the feeling i have every time that show concludes.
i'll give nick cannon credit. at 28, he was able to land mariah carey, 42. she's still hot for her age, now that's a hot mama!

Julian Speed wrote:
Richard Dawson (RIP) was my favorite. He came across as a warm person and displayed wit and enthusiam as a game show host. Nick Cannon is fun to watch from time to time.