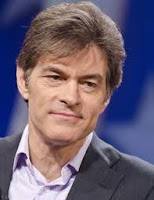 I am not a fan of his nor am I am fan of Dr. Phil, another of Oprah's prodigy's. They are both slick and in my opinion..both are snake oil salesmen.

I dislike Dr. Phil a lot more than Dr. Oz, but I trust neither.

I am not a follower of Dr. Oz or Dr. Phil. I don't trust either of them and don't watch their shows. They are out to make money and fed on the audience. Thanks for sharing his life and just how arrogant he really is. kam

Great inside goss on the trees around the pool Em.Yes he is a bit slick.His way or the highway.The Doctors is another one.I live next to a GP and a dentist and they are arrogant as well.

this is my view exactly...i am restating what a previous poster said: ... I am not a fan of his nor am I am fan of Dr. Phil, another of Oprah's prodigy's. They are both slick and in my opinion..both are snake oil salesmen.

So many doing so much! There are so many
'faddish' people in the world. Have no time or inclination for Dr. Oz --- too busy writing and getting older! Then, again, perhaps we writers are faddish people! Imagine that!

No, lol! Dr Oz won’t be my health Guru. I’d rather trust my own Family Doctor. He’s not famous and he’s probably not rich but he knows our family, he remembers our names and all our separate health issues. We trust him. If he thinks we need to see a specialist we trust his opinion and whoever he sends us to. That’s what it boils down to, trust. How can you trust someone on the TV that you barely know and who doesn’t know you?

Since Doctor Phil was brought up in this I will say I cannot stand to watch him and find him incredibly arrogant, abrasive as well as abusive. Dr. Oz with his delivery is not quite the same as the above mentioned fake doctor. With that said I do feel that Dr. Oz is sharing info that might be scientifically interesting but he is also saying these are alternatives to... To be absolutely 100 percent honest I don't trust Doctors. Like Attorneys they call it a practice for a reason. How long it takes to get it right??? No idea. Bottom line most Doctors are required by our very own laws to push pills period. At the very least with Oz you do get alternative intel that you may research on your own so count me at 50/50... Giggling & hugs Emily you finally got me to say something. I usually prefer to keep my unkind or not so kind opinions to myself. Blessings to you & John. Chey

I find Dr. Oz a bit unorthodox. He is a doctor that does NOT push pills. That is rare today. With all the incentives from pharmaceutical companies, I like how he reverts to natural remedies and preventative medicine.

Dr. Oz is Nothing more than a snake oil salesman. he has no credibility left.