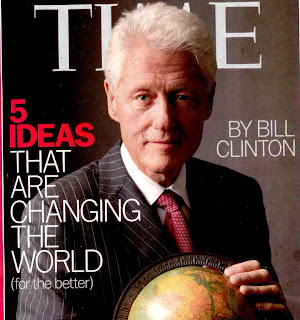 We have this remarkable man in our midst. All the things we have felt about rd him exist in a cloud that surrounds him.

Rosy pink? Well, he and Hillary live far, far apart, but aren't they still a remarkable -- yes -- an amazing couple?

Infidelity -- what he did with that pretty girl -- what it cost him, and us, in terms of hope, faith, fidelity, truth -- isn't it still grey with dark spots?

His brilliant mind -- all that, that's sky blue -- his ability to gather, sift and sort information and facts, and create pathways -- and yes, lead the way. He leads the way and gets us walking on the road to a hopeful future.

Even though he looks tired, Bill knows how to talk, how to state and sell -- more than sell -- promote realities. Like a preacher he is -- once he gets started, he won't let go till he's finished sermonizing, and sums it up into a powerful phrase you can't help holding onto.

What power he has no matter what he does -- he does whatever it is, better, I think, than any politician, any leader, any celebrity in the world.

But he does looks older. You wonder if he's okay -- he's had a lot of heart surgery. Say his name and you think busy, busy love life -- you're remembering Jennifer, Monika, and Paula what's-her-name he played around with, while he and Hillary were physically living together.

Is he still sleeping around? How does he manage with that huge schedule of hugely important things he's supporting?

Lust, and personal fulfillment drove him in all the years that we've known him, and now -- do they still drive him now?

Right now he doesn't look like a man who can meet someone at a party, go home with her, and take her to bed. He seems almost too frail.

And Hillary, right now -- she's not frail, but her inconsistent hairdo, her facial expressions -- to me,  she seems weary, and unsure of herself.

Even so -- even when they're thousands of miles apart -- she's his spine, he's her spine. If he and she decide to do more about running the county ... Well, they'll do it -- he'll ignite like he did -- when was it, last week?

Maybe I need to think that, whether it's really true or not. Thanks for giving me that Bill.
Posted by em's talkery at 4:00 AM

I think most of us have forgiven him, and his tremendous political and people skills are standing out.

Agree with everything you said Em!

Agree with everything you said Em!

A gifted politician, Mr. Clinton is, and he is one of the most articulate of our presidents. He also governed more toward the middle of the political spectrum as he knew he must... And, yes, the Lowinsky (?) sexcapade cast shadows.

With all that said, I look through different lens I'm afraid if you carry the Clinton mystique forward to the current resident of the white house. Obama is certainly articulate and gifted with gab, but he is not a good custodian of our treasury and of our image around the world. His 'promise of hope' got lost in all of his constant campaigning since taking office, and, now, he is back with the same 'promise.'

This is the picture I see through my lens. If your picture is different, so be it. The people will speak in short order. It is my hope people will vote for individual freedom and what our constitution laid out for us, not a society dependent on the government for all their needs.

Sorry, Em, if this is not what you wished to hear, but there it is...

OK I don’t think I really have or should have a lot to add because I’m not American and he wasn’t my President. I will say though that while some people make unwise choices in their personal lives, we have to remember that that is exactly what it is, their personal life. What happened between he and Hilary seemed to effect them but not define them as a couple. I didn’t even know they didn’t live together anymore. They still exude that sort of invisible tie that comes from a long relationship.

Mr Clinton is living proof that no one is perfect. And, being imperfect doesn't mean that you cannot do a perfectly good job! Vote Obama. Keep the dream of 'democracy' alive. Keep our world safe, America -- please.

I must comment on one glaring item in this WONDERFUL blog....the young lady in which he did, or did not, have intercourse with.

My opinion has always been one of admonition. Not to the former President of our country, but to the media and the masses who condemned this man. What he did, in my opinion, was not morally correct. However, his private affairs were something that he and his wife should have dealt with. People in this world have been having affairs, doing immoral things, having OPEN marriages, etc for as long as time. For us to put this man on trial and make it a point to uncover his personal life was horrible.

I firmly believe that if a man or woman was hired to do a job in the public sector, their personal life is off limits. Unless you commit a crime or partake in illegal behavior AND are convicted, it is your business.

I was recommended this web site by means of my cousin. I am not positive whether or not this publish is written through him as nobody
else recognize such targeted approximately my difficulty. You are incredible!
Thank you!
My homepage ... get my ex back