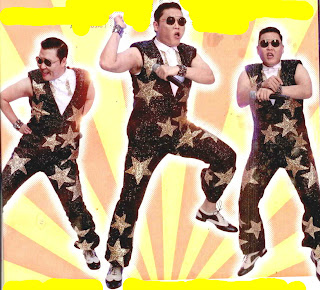 No offence Em but this is one post that holds nothing of interest for me dear lady.There is not a single personality in the account worthy of a minute of my time,as for the "morality" of the "Gangland" culture,I would argue that base immorality is a more apt description.

LOL! I enjoyed the informative topic about this Korean star and his dance and also about GANGLAND interest. I love watching the Godfather series. Ellen made me smile and laugh with her trying to dance. Dancing is a good thing and I am happy you posted this. kam

I must live a very sheltered life. I missed the whole gangland style.
When I watch the news, I see the nightly murders, usually drug or gang related. I understand that some young people take up gangs because they have no choice; it's either join a gang or die.
But to glamorize the gang style like you see, with a guy's pants halfway down to their ankles (originated with jail inmates who aren't allowed belts to hold their pants up, I understand) is a little much for an older generation to take.
But maybe the whole point, and why gangland style is appealing is simply to rebel against the style, opinions and beliefs of their parents.
Where some people are saying less is more, ie having fewer possessions is liberating, youth is saying, I want all the glam, the jewellry, clothes and fancy cars while I'm young. And the easier and faster I can get it, the better.
As one matures, one starts to view most if not all material possessions as toys. Fun, but not necessary to existence, and, as the kids will find out, a lot of work and liability.
Cars, jewels and fancy electronics are eadily stolen, clothing styles last barely one season.
So you end up galloping, no matter what your profession, to support a lavish life style.
Michael Jackson was said to have gone into a high end store once, and pointed out the items he wanted. In half an hour he'd spent six million dollars. On nick nacks.
Some people are addicted to shopping, some people like the appearance of status that expensive possessions confer. But in the end, they don't fill the emotional void or feeling of low self worth that people have.
So, Gagnam style. A cute but passing fad. Psy will have to come up with another act to keep the bucks rolling in.
I'm not a huge fan, but I enjoyed the parodies, especially NASA's.
Again, an interesting topic, Em. There are more to these simple things in life than what's on the surface. Thanks for the topic.
Louise Sorensen
louise3anne twitter
louisesor.wordpress.com

My little newphew dances the gangem style. No offense to anyone. I have enjoyed your topic.

Actually I don’t mind it…for what it is. It’s just a bit of fun. No one’s winning any awards here for dancing or singing…I hope, but it is catchy. So catchy in fact that when the music starts anywhere, people, especially kids, find themselves joining in. It’s one of those songs that when it starts playing at a school dance all the kids rush onto the floor and everyone is laughing. Nothing that makes people smile can be all that bad can it? This is a tough and serious world and a bit of fun lightens the mood.