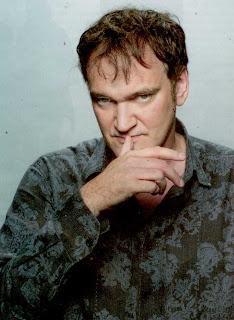 Great tribute blog to Quentin Tarantino and his movies. I do want to see his latest western moive and have watched the previews with anticipation and edge of my seat feelings. He seems to have everything under control and at his beck and call. He is a very talented and gifted man and yes I agree probably a genius. kam

Hi Em,
I'm not a fan of his genre so I don't follow is work. This is a wonderful article about him though! :D

I think you're right, Em. I think Quentin Tarantino IS a genius. I'm not a big movie watcher, and I see a lot of death living out in the country, so I haven't seen all his movies. I watch few movies.
But I admire his work, because I believe he tells about life the way it really is.
If you've ever known any geniuses, you'll know that they are very unusual. They live outside the norm.
Most people live in a comfortable little bubble of belief that insulates us from the sordid realities of war, history and the happenings of the present
I know that terrible acts of brutality, pain and suffering happen every moment on our planet, but I cannot function if I dwell on these things too much.
Some people by nature are not bothered by these things. Some, like me, are.
I think Tarantino wants to shake people up, to show them the real, raw side of war, crime, human relations.
Because we are a violent species. Like tigers, we eat our young. And he is a genius. When the two factors come together, there's blinding revelation.
This is his genius.
Louise Sorensen
louise3anne twitter
louisesor.wordpress.com

My wife and I saw Django:Unchained last night. An epic movie over 2 and a half hours long. Love, loss, romance, betrayal and, or course, lots of juicy battle scenes to get the heart racing. A truly great movie, and no doubt an instant hit.

I hear a lot that Quentin 'tries too hard' and 'wants to emulate Hitchcock by appearing in his own movies'. I think most people just don't understand him. I honestly believe he's in it for the passion, for the sheer unbridled love of making really good movies. Pulp Fiction, Reservoir Dogs, Kill Bill, Deathproof and now Django. All incredible cinematic feats of the highest order.

He gets nothing but praise from us. Unlike a lot of cynical pseudo-fans, we are not waiting for his first really bad movie. We enjoy celebrating his successes. He seems quite a delicate character hidden behind a raw, often sarcastic, sometimes bordering on arrogant mask. I think he's simply a nice guy, with a few troubles, just like the rest of us.

Of course this isn't good enough for the Hollywood hacks. He has to be 'love torn', 'deliberately shocking' or 'deep and brooding' to fill their columns.

I think he's a genuinely nice fellow with an amazing talent for movie making, a born director (and not a bad actor to boot!).

Thanks Em, another great article!

Yes I agree is very smart/wise. He is no doubt awesome. I don't follow him nor did I know what he has produced. To be honest your blog about him has brought him more to my attention. He seems very different. Thanks for sharing.

Not really a fan but I have enjoyed some of his movies .i.e Kill Bill.

He's probably one of the few people I know that can almost get away with showing anything on the big screen-almost.

Django for example was over the top in your face insenstive cinema crying for justice. I almost thought he was shooting for a hardcore version of Blazzing Saddles in a manner of speaking.

I asked for no apologies with this film. That was the reality of the world at that time. With that being said-both me and my wife enjoyed the movie-we laughed, cheered and were shocked all throughout the movie.

I didn't recognize Quentin when he made an appearance near the end of the movie. My wife made that observation.

The film without a doubt will not suit the palette of many individuals.

We were shocked to see that some viewers brought their children to see this movie-shame on them.