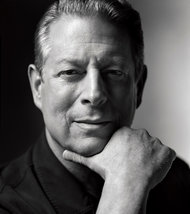 Say Al Gore and I think environment, and immediately have a sense of Gore's breadth of vision, his steadfastly honest, unwavering, loving concern for our country.

And his projects, research, his huge efforts to gather the world leaders at one table to agree, to work together, to do what must be done to hold onto water, green lands, forests, animals, breathable air.

What Gore said and did when he won the election, or maybe won it, and he chose to concede -- why he conceded we'll never truly understand -- but what he said, and how he handled it was, and still is admired, remembered.

(Also the vision of him kissing his wife Tipper so lovingly, bending her way back, as if they were ballroom-dance-partners.)

Other events -- what Al Gore has said and done and written, and tried to fix, spent his time and money on -- a builder he is -- with his own hands, he can do all the things that he has hired the top, highly trained, full-lime experts to do.

"In a little more than a decade, since he won the popular vote but lost the presidential election to George W. Bush in 2000, the former vice president and Tennessee senator Al Gore has been a best-selling author; starred in an Oscar-winning documentary, 'An Inconvenient Truth' (2006); won the Nobel Peace Prize, in 2007, for his environmental activism; and made a fortune some have estimated to be bigger than Mitt Romney’s, thanks in part to the recent sale of his stake in the 'Current TV Network' to Al Jazeera. In his new book, 'The Future: Six Drivers of Global Change,' Gore takes on a subject whose scale matches that of his achievements and ambition."

Later in the article, the reviewer says --"The book focuses on the hacking of democracy and gives the reader a vision of the influence of technological innovation on politics."

Hacking of democracy -- that phrase resonates --it's a subject that's on the minds of many of us -- it's what I feel.

But Al Gore seems different now -- older, less passionate. To me it's as if he has put himself in a lock box, where we can't get to the real man.

There was ugly stuff in the news after he and his wife separated. Suddenly we were seeing a guy who missed his wife, needed a woman sexually. Or, maybe what we saw was edited and made disturbingly personal. (Like the Fox News reporter did with Shirley Sherrod -- that truthful, liberated government worker who's words were edited, and  made into to race-prejudiced, bitter, black woman who was hurting people who needed help.)

An elephant never forgets, they say. And we TV watchers, eater-uppers of scandals -- we don't bother checking out what's served to us. We taste the spicy, sinful, deliciously wrong things a hero does, and yum yuming, remember the feast.

Does the lock-boxed Al, who's layered on about more than a few pounds, who talks flatly, dispassionately, always logically -- with pros and cons in a single sentence -- has our Al Gore donned age, and pounds protectively?

The Al Gore chatting with the interviewer in the video below, agreed with the negative possibilities, when the  kindly, polite interviewer suggested, "Haven't you  sold your network to an oil backed enemy of America --aren't you're making millions and giving Al Jazerra a daily presence in our lives?"

Brilliantly logical, the quick-thinking Gore, immediately, unhurriedly, agreed. He verified he "done wrong" and justified it, backed it with reasoning that even anti-Gore-ites can't ignore, scoff at, or disregard.

Golly, I truly admire this  man. He inspires me. And yet -- I don't know why -- but when he's talking, edplaining  so clearly, eloquently, my mind wanders.

It's probably overload. I'm plumb worn out from ideas, marvelous things that urgently need to get done, that I can't do anything about. No, I not bored. I just feel like taking a nap.

Hey, we're all growing older and lock-boxing ourselves into yesterday's ideas.  Even if you're convinced what he "done wrong" is wrong, this is Al Gore.

Of course he has lock-boxed himself. He has to protect himself, has to speak less passionately -- he's been battered and bruised, and he's weary -- like we are older, wiser, and wearier.  Even so, Al Gore always thinks things through, and IS always, always,   steadfastly honest, unwavering in his  loving concern for our country.

Is this a conservative parody? BTW, we don't live in a democracy, it's a representative republic. But if you're mocking a fawning liberal's intelligence, GOOD ONE!

Great write-up Em. I agree. Public officials are battered by the media.

At the same time I no longer trust the media - it's become 'entertainment' instead of informative journalism.

I hope one day it will reverse as the country really does need a vibrant 'press' to watchdog Democracy.

I was a supporter of Al Gore, but I never really liked him, the way I liked Bill Clinton and Barack Obama.

You hit nails on the head with many things you mentioned. However I do agree with getting older we all start to lock box things away, weary or health issues or just being tired. I have known about lock boxing things up myself, I see people today who are young but in an old person's body, meaning health issues. Just like Al Gore he seems to have grown weary and tried like most of us, however a battle each day in life, he may have lots of money but no matter a person's wealth, to me having health and happiness is most important. Today I am here, I see the end more clear as I walk closer to the light in my own tunnel.

Great tribute blog to Al Gore. He is so successful, wise, and important to this country and the people. Global warming is only one of the great things he has brought our attention to with good ideas and constructive thoughts. He is to be admired and trusted. thanks for sharing. kam