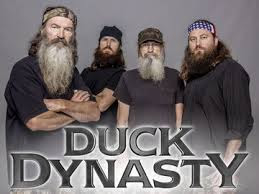 Not my type of show, but I do love to watch the shows on Animal Planet.

When I see this show coming on television I turn the channel immediately. Calling birds and killing them isn't my cup of tea. There must be many people that love the dynasty, but I'm not one of them. To me, they dumb down our English language and our civility. Hey, that's just me.

Em, you amaze me! Where DO YOU find this stuff? ;-) No one can accuse you of having repetitive, boring blogs. That is for sure!

Hehe, Hillbillies they are not but they play the part. I don't like to watch it so I don't watch it.
Why do people love the show so much beats the heck out of me.
Killing ducks and chasing them is boring but sad to see them DIE.
However it made them all very rich.
I swat flies all day and chase them after kids leave the doors open. It is a job but I have to do it. I have to kill those pesty flies. I do believe in killing those nasty things. I went as far as to trap a fly in a bathroom and stay in there till I killed it. I hate the things. Okay enough about my hating flies.
I love ducks but hate seeing the drop dead out of the sky. I am from Kentucky and they call us hillbillies...and Yep, I am one for sure in a good way.
Thanks EM, you amaze me with your great blogs as I no doubt amaze you with my down to earth answers. Jan

I respect what these folks do, but reality shows are not my bag baby. Half the time the producers of the reality shows like to stir the pot. To me, that is not reality. It is staged reality. If you want real, follow me. I keep it real and put on no airs. Just so know why I don have my own show....no drama. I have no drama, no exes with issues, no skeletons that need to come out, nothing. So that, my friend, shows why folks tend to enhance their reality shows. Life isn't always that dramatic.