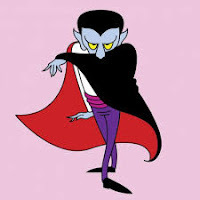 Why do  I keep bumping into vampires?

It's annoying. It's ridiculous. I am not interested in vampire stories, or vampire movies. Yes-yes-yes -- I have watched some of the famous vampire films, but couldn't stay with them -- got bored -- yes-yes-yes, BORED.

The ghostly human shape -- face with toothy smile -- jagged incisors -- the head nuzzling someone's neck -- the blood red drool -- Catholic crosses, mirrors, creature sleeping in a coffin, stab it three times in the heart -- all the symbolical mythological baloney -- yes-yes-yes -- it frustrates and bugs me.

Vampires stymied my career as a writer. My agent got offers for my saga manuscript, "'Somebody,' Woman Of The Century,"  from Simon and Schuster, Random House, and Putnam, who offered $150,000, more than the others. My agent signed with Putnam. Two months later a letter arrived -- WHAMO!  Evoking a clause, Putnam dropped my book, saying author Emily Frankel's "revisions are incompetent and unacceptable."

Huh? (I'd only revised 4 pages that they'd asked me to revise).

So here I am, bloggering, tweeting, facebooking, youtubing, selling my six self-published novels.

Just a few days ago, I read about Stephanie Meyer, 39-year- old author, whose vampire romance series "Twilight," sold over 100 million copies, and has been made into money- making films.

Am I jealous? Would I want to trade places with her artistically? Well ... yes-no-yes-no-maybe. She was deemed " bestselling author"  of 2008 and 2009.  She's sold over 29 million books, and now she's producing more vampire novels, and more films.

Ann Rice, who is, perhaps, the world's foremost, most successful vampire writer, said, “The vampire – the symbol for the outsider in all of us – is romanticized by teens because they so desperately need to find a noble path through the hideous passage that Western culture has set up for them.”

Yes, history tells us that every age gets the vampires it needs. In 1897 when Bram Stoker wrote "Dracula," and England had the largest ports in the world, there was fear of disease that was being brought in by immigrating foreigners.  Stoker intuitively, rightly, created the monster bringing dirt from a foreign land.

This happened again and again in every period that has had a wave of interest in vampires. In the 1980's, with AIDS, remember how people became infected by vampirism like a disease?

I gotta admit, my ideas on this have been shaped by Margot Adler, correspondent for NPR, "All Things Considered," who's written extensively about worshipers and pagans in America.

Perhaps, Meyer's Twilight series, with its huge following, perhaps has to do with our need to be addicted to something -- alcohol, cigarettes, drugs, food, exercise -- we are clearly addicted to living longer. We seek immortality with possessions, homes, entertainment, and recreation. I think our vampires are movie-star glamor-girl-glamor-boy hunks with cars, boats, planes, high fashion everything, and money to burn.

If I decided to write another novel, I'd make my heroine a very young girl. I'd write about her growing up and fighting the waves, the riptide that pulls females today into the whirlpool of choosing a career, a love life -- the hot tubs -- yes-yes-yes -- with wide-open eyes, my heroine would swim along -- kicking and flapping feet and arms to stay afloat, keep floating and moving along, as her very own, special, unique self.

Yikes, that's hard to do or try and be, these days.

I hear you Em. These whirling fads to take a toll on creativity - and yet boost it in other areas at the same time. Have I written 'vampire' - as a matter of fact I have, a script now 'going through the pipeline'. Will it be produced? I don't know. Will I turn the script into a novel? Well, probabaly, why not? Is that my main focus? Hell no. There it is...

You do NOT want to be like Stephanie Meyer! I read the "Twilight" books, because I knew so many people who were, and wanted to understand why, and discovered that Stephen King was write calling her writing ability into question. They aren't the WORST novels I've ever read--I think I'd give that to Darwin Porter, STAY AWAY from his books, they're HORRIBLE--but they certainly weren't GOOD!

I have enjoyed some vampire books and films, and do see the attraction, but it is WAY overdone!

People seem to need a great deal of escape right not, (and I realize there IS a lot to want to escape from in 2013!), which I guess is why the whole supernatural thing is so popular. I'd MUCH prefer a reincarnation-themed love story though, than a vampire one! Of course, I guess some of the escapism requires some kind of "super power," which most vapires these days do have.

As writers, we need to be true to the stories INSIDE us, not bow to whatever's "popular" at the time--even if it means we don't get those big publishing contracts! Keep fighting the good fight and raising your voice!!!

There is a sexual element to vampires too - especially for young women.

I hate vampires and anything else that is made to scare people. Now I have another reason...interfering with the publication of your wonderful book, which I so enjoyed as an ebook.

I don't understand what motivates people to enjoy things that are scary or any form of horror.

Em, all I can say about writers is that Stephen King's were much more important to me, than the stories of vampires. I did enjoy 'Diary of a Vampire', though.

Interesting and fascinating blog. I have enjoyed all the vampire books and movies. I don't know why I am drawn to them though. I liked your books better. Funny, I am sort of a kin to vampires...I have a rare blood disease where my saliva contains the same enzyme that the vampire bat has. Does this make me a vampire? Am I immortal? Lol! What a book I could write! kam

I don't understand the whole vampire craze, especially with women in their 40's (and older!) A teen? Okay, MAYBE.... they want to escape reality and those vampire series/books are riddled with sex. Hmmm, maybe that's true of 40-somethings as well? I don't know. As a woman in her 40's, I don't want to spend my time watching (or reading about) teenage vampires getting it on. But that's just me. :)

I don't believe in the blood sucking, the actual BLOOD sucking vampires. But there are many people who suck the life out of people, companies and countries all in the name of selfishness, ego and dogma.
In a sense, humankind coined the term 'vampire' to describe these people, Vlad the Impaler, notwithstanding.
I DO believe in 'Psychic Vampires' the new term to describe toxic people who suck the potential, or the life out of you. One should run screaming from such. Unfortunately, in life, as in the movies, these psychic vampires give back a bit of honey to their victims, to keep them around.
As to vampires as a story trend, Meyers seems to have sent it orbital and everyone has been trying to write a similar hit since.
The number of successful, popular vampire shows on television illustrates that the genre is still alive! Hehe. : )))
But you can't blame vampires on 50 Shades of Gray.
Hit books, like hit shows, are an anomaly. The right story at the right time.
Unlike the stock market, there is no amount of insider trading that will make a hit, and like the stock market,
You can't time it.

Interesting indeed. My two books are about tiny vampires, I did not make them real scary. I am a chicken my self. Now the one lady who said she was sort of kin to vampires would make a interesting book. However I do hope her the best with her health.
I never watched all the Twilight movies or read the books. I just know people loved them so much. I am happy for anyone who does well with a book. LOL> I write but I know I will never ever become famous or sell a ton of books. There are so many wonderful authors out there, I have read books of every Genre and enjoyed them without vampires being in it.
Good luck to you EM, your blogs are very, very interesting.

Now I usually am on the side of the vampires. I grew up rushing home from school to watch Dark Shadows cheering on Barnabas. But, the twilighty thing, well, twinkly fairy dust vampires, and teenagers....Teenage vampires. Teenagers, that stay, teenagers, forever. " Dr. Van Helsing Hand me that stake!! "

Interesting that you do not an interest in vampires. I absolutely adore vampires. I like them more for the power and immortality and the unceasing darkness that most must reside in, though they'd all love to walk in the sunlight.

And of course there are the day walkers.

I've started brewing my own vampire series a few years and have most of the plot, and characters worked out. I mean hey, I was a vampire every Halloween as a kid for about 5-7 years. I'm addicted to Dracula.

I guess the reason that vampires keep popping up is that you can do anything with them. They're fiction, and they're fun. They're all that humanity is an isn't at the same time.

And nice piece on DiCaprio as well.

Interesting take on the latest and renewed interest in vampyres, as they are spelled abroad. I think people will always be enchanted by vampyres. They promise eternal life, they are the forbidden fruit, they are the bad boys of legend. With all due respect to Ms. Meyer, Ms. Rice, and all the authors who have written and will write, the timing is everything. Many folks who read books tend to stay within a certain genre. While I read across genres, I have found some of my favourite books to be "not famous." I have said many times that art is perceived very differently by many folks. That is a given. But the fact that these above mentioned authors hit that lucky spot only proves that they either were working very hard at their craft to write many books before the "popular" ones or they are extremely lucky. I prefer the former.