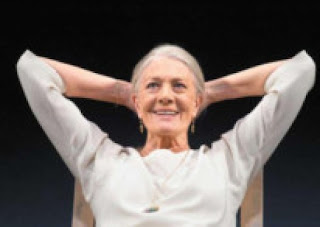 She is a queen -- a ruler of the theater world where I live. What she does, or doesn't do, what she says, how she behaves, what roles she chooses to play -- all that affects me.

She's an older and wiser famous lady -- not a has been, but a "once-waser." Everyone used to know her name. Now, I don't think they do.

I'll always remember her as the beautiful Guinevere with Richard Harris in the film,  "Camelot;" as Isadora in the film about the iconoclastic modern dance pioneer, in which Vanessa danced as if she were a real dancer -- and as the liberated, liberal "Julia."

Oh my, there were a lot of protests when she played a Jewish Singer at Auschwitz, in "Playing for Time," -- Zionists hated her for her outspoken support of the Palestinians -- the Jewish Defense League picketed the awards ceremony when she was nominated for an Oscar for her role in "Julia." Even so, there were many more unforgettable roles she played for which she won awards and nominations. She is the only British actress ever to win the Oscar, Emmy,  Tony, Cannes, Golden Globe and the Screen Actors Guild awards. She has also garnered many headlines about her marriage to director Tony Richardson, their two children, and the son she had with actor Franco Nero.

I can't compare Vanessa to anyone else I have focused on because of their artistic excellence because she is ... something else. I am searching for words -- she walks alone; a spotlight on her; on the moment at the moment.

Whether you approved of her activism, her blunt blatant support of things you thought were wrong, or not -- her money was where her mouth was. It still is. She never catered to us, trying to win our approval. She IS what she is -- the epitome of what she is doing as an actress and where she's standing now.

Nowadays, Vanessa Redgrave grows larger and opens her heart, her arms wider and embraces more of whatever it is.

I agree with every word.

Great article Em...My feelings about the queen of the big screen. There are few actors out there as versatile and down to earth as she is. Her activism is the very core of the woman. We need more like her. Seems today's performers are milk toast compared to her.

I have always enjoyed her. AND the other members of her family.

Ihave very mixed feelings about her. I am by no means a Zionist, but her support of the PLO, especially on the Academy Awards, was especially off putting and turned my stomach.

I think she is a brilliant actress. Her performances in Julia an Playing for Time (and all of her others that I have seen) were simply brilliant! I think she is truly one of our greatest actresses and when I watch her perform, I try to block out her politics.

Loved your tribute blog to Vanessa! She is a true star and wonder woman. I love her movies and especially PLAYING FOR TIME which I cried.
She is the best of the best. Thanks for sharing. kam