GOING TO A DRIVE-IN THEATER 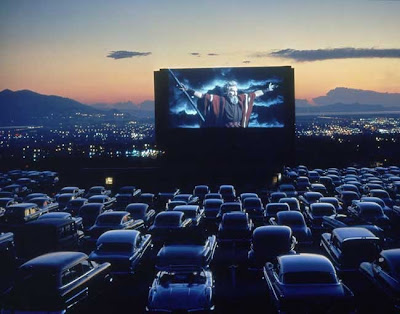 My family, when I was growing up, did NOT go to drive-in theaters. On Saturday night or Sunday, we went to the local movie theater. But all of us (my two sisters and brother, Mom, and Dad), piled into the car, and the Saturday night movie was a family tradition.

I'm borrowing specific nostalgia from a Time Magazine article.  "Summer evening, the white of the screen against the rose of the sky, the incandescent glow from the concession stand, kids tossing a football as they wait for the show to begin, the smell of bug spray, the rows of cars with patrons draped across the roofs..."

Gee, it's sort of like what I experienced at the local theater, just more so.

When something "typical" disappears, it means the country is changing. Is the resurgence of drive-ins the result of our pinched economy? The cost of seeing a movie at a drive-in is defintiely less.. $8 for an adult $6 for a kid, or thereabouts.

Going to a regular movie theater these days continues to get more expensive. George Lucas, the guy who made "Star Wars," referring to the cost of going to the movies, said, "It's going to cost you  $50, maybe $100, maybe $150.” (Lucas and Steven Spielberg were discussing the fact that producers making mega budget movies have to make more money at the box office in order to survive.)

It's 80 years since Richard M. Hollingshead Jr. secured a patent for a "novel construction, whereby the transportation facilities to and from the theater are made to constitute an element of the seating," and opened the first drive-in theater, in New Jersey.

Audiences (called "ozoners" or "outdoorers") proliferated in car-loving North America. Movies such as "Grease" remind us, even if we didn't experience it ourselves, what fun it was.

There were 4,063 drive-ins back in 1958. In the mid-eighties and nineties (maybe with the development of the computer and Internet), there was a wave of closings; during the past decade, the number of outdoor theaters has dwindled further -- now it's down to about s 357 survivors.

One reason maybe be the film projector. Theaters, nowadays, have digital projectors. Production studios don't offer film prints anymore -- they're offering "digital" prints.  "Cinedigm," a digital-cinema company, and the "National Association of Theatre Owners," have worked out a fee arrangement for movie theaters and drive-ins that helps theater owners repay the cost of the $70,00 projector that each theater needs. The studios, using money they save by not having to print film, are actually loaning money for the projectors, and helping  theaters re-open.

Gee, I find this hopeful.

With what's in the news about race prejudice, immigration, heatlhcare, impeach Obama, and the ever-rising cost of everything we need -- negative news is piling up higher and higher, along with our guys still dying in Afghanistan, and now an enormous black dark wave -- we know chemical weapons have been used, and may be used again.

If drive-in movies -- things like that which we used to enjoy, that were  once a part of family life -- i 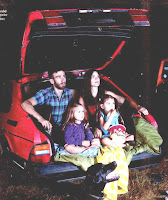 f that sense of family is coming back and  getting more important ... well ... maybe we're hanging on to being part of  the family of man, and attached, we're anchored in a way that keeps us from  drowning, a way that buoys and keep us afloat.

When I was little, my parents would put me in the back of their station wagon to sleep while they went to the drive-in. Those were the days before seat-belts or rules about children in cars.

I love drive in movies! The small Kansas town had one and I think I went every weekend. My 1st date took me to the drive in and when it was over I let him kiss me. I must have shook him up cause he quickly drove me home. All the way home we could hear something dragging and banging against the car and the road. When we stopped he got out and behold.....there was the movie speaker hanging out the back window still attached to the car! Lol! I must have flustered my date with the kiss and in his haste to leave he forgot to reattach the speaker and cord to the pole. I laughed and laughed ......he never asked me out again. I would go again to the drive in movie if there was one near. kam

You have resurrected dead memories of our family heading out to the drive in with two kids in back and the wife holding our toddler in the front seat. Often the back seat would be asleep before the movie was finished. It saved baby sitter cost also. This was back in late fifties thru early sixties. Thanks for the memory of happier days.
George

Great post, Em! I think you're right that in this age of negativity, (but what age isn't, really?), many of us are trying to hold onto "simple pleasures" of a more innocent time. I suppose the children of today will look back on these being the "good old days," which puts things a bit into perspective, and reminds me that we WILL get through these worrying times.

(This message brought to you by Pollyanna Julie :) )

I remember seeing movies like "A Hard Days Night", "Bonnie and Clyde", and "Forbidden Planet" at the Massapequa Drive In, on Long Island, where I grew up. That was a long time ago and I now live in Montana, but those memories will follow me where ever I am.

I loved going to the drive-in with my dad and step-mom when I was a kid. It wasn't just "watching a movie," it was "having a family experience." But my favorite movie-going experience, not including the movie itself, was watching an American flick dubbed in Italian in the park in Cortona, Italy. Taking this beloved indoor pastime outdoors is always fun!