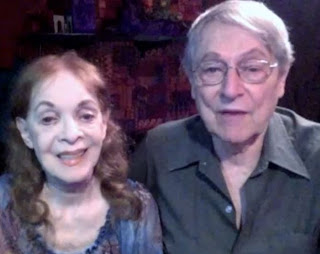 John agrees. He explains it's a tradition, and it is also hard on the actor.

Though John understands why producers need eight shows to keep a show running, he explains why the schedule for Broadway, with Wednesday and Saturday matinees, is difficult for an actor, and why Off Broadway's schedule, with weekend matineesm can be even more difficult.

John suggests he might do better negotiating for a six show week -- if he's offered a part in an Off-off Broadway production.

That Broadway star Cullum can negotiate better working conditions for himself nowadays if he's in an off-off Broadway production gets the Cullums chuckling.

Your videos always engender a smile to my lips! Eight shows is far too much. I could always cope with the mid-week matinee but the the Saturday matinee was a nightmare purely because of the turnaround time. I often experienced the five-minute turnaround so there was no time to eat even if the ASM had brought something in. Only time to freshen the make-up, if that! Thank you for sharing, as they say these days.

I think that working 8 shows a week has to be grueling. I don't know how the performers and crew do it.

I so admire John for his amazing energy and dedication. So many actors in his age group have retired, but not John. It is obvious that acting is so deeply a part of his very existence, that he would never dream of retiring!

Here's to our own John Cullum, whom I have watched perform since his days in "Camelot"! I salute you and love you!

My theater-going days happened during the era of Wednesday matinees. Much more civilized. I can see why the producers wanted to switch to weekends, but how impossible for the actors!