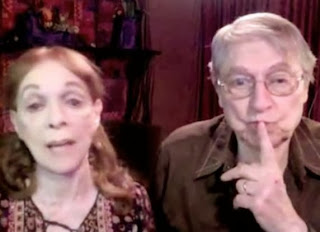 Very thoughtful and entertaining, as usual.

I don't think I could ever go into politics, although I do come from a family that is very politically oriented.

Thanks for being part of my weekend! I always look forward to what you two will talk about, and you always bring a smile to my face.

I think that John would be an excellent Mayor for Knoxville. You would have to leave the big city for the "laid-back lane". Wouldn't it be nice to just be there to enjoy the laid backidness though and maybe teach young actors instead? I believe that John has; as he said, always had leadership in his blood. Being an actor that's been successful is no small achievement and one that is valued; or, I think it should be and most of all by aspiring actors. It is just a thought that you may have not thought of? Only I would probably pull for someone to move to a city that I'm not from and have only ever visited... maybe? My campaign has begun; the one where I try to entice you to move closer to me; selfish though it is, his home town has earned a favorite place status with me and is a place up north that would consider living. Does that sound decisive enough for a political stance? Did I leave a way to steer myself in any direction and to evade any question; the creed of the politician? Thanks to James "Sunny Jim" White for the song title and song lyrics, (The Laidback Lane) and 10cc for "I'm so laid-back, I'm laid-out"; for the brain bump inspiration so early in the morning. sez Marcus