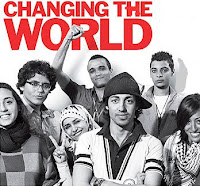 A rap song, "Rais Lebled," by the Tunisian rapper known as El Général, is being sung in several countries in different dialects, different languages, saying, more or less, the same thing -- "Mr. President, your people are dying, People are eating rubbish. Look at what is happening. Miseries everywhere, Mr. President. I talk with no fear. Although I know I will get only trouble, I see injustice everywhere."

Rage against oppression is sweeping through the Arab world -- from Algeria to Yemen.

The revolts are led by ordinary young men and women, mostly novices when it comes to political activism. They're using social-networking sites on the Internet and texting over mobile phones, demanding the right to choose and change their leaders, and end corruption.

Alana Shehabi, 30, a Bahraini economics lecturer and political activist has said, "We are all on the same wavelength." The fact is, in less than two months, this generation has wrought political change on a scale not seen since the end of the Cold War. Not long ago, the men and women who are protesting were called the "lost generation." Now they are the "Internet Generation," the "Facebook Generation."

It's given a boost to the Green Revolution in Iran, which, of course, has provoked a fierce crackdown by the government. It's inspiring protesters against Gaddafi in Libya. These young people may not know yet what kind of democracy they want, but they want free and fair elections.

"I don't care who ends up running this country," says Egyptian student Khaled Kamel, "as long as I have the ability to change them if I don't like them." He's using an ancient Hewlett Packard PC and the Web, chronicling his anger in sarcastic prose in a blog.

Jared Cohen, director of Google's corporate think tank, tells what happened when he, in his student days, fell at a train station. "A policeman beat me because I was lying there on the platform, which you're not supposed to do."

In Alexandria, a young businessman, Khaled Said, was beaten to death by cops. A Facebook page entitled "We Are All Khaled Said" was created by an anonymous administrator.

Blogger Kamel joined, became one of the lead organizers, and connected with Wael Ghonim, the Google executive who is becoming the face of the Egyptian revolution.

In Yemen, activist Tawakul Karman, 32, a mother of three, moved by the plight of 30 families, made them her cause. Every Tuesday since 2007, she and scores of others have protested in front of Sana'a University, There are now thousands, every Tuesday, protesting.

Fadi Quran, 22, a Stanford University graduate, who runs an alternative-energy program, set up a Facebook account demanding unification of the warring Palestinian factions, and an end to Israeli occupation. Quran says. "It's a new vision. We're going to achieve the goals of our struggle."

How do they feel about America's unwillingness to take sides, for instance in Cairo?

"It's been very hard for most people in the Arab world to work directly with the U.S. government," says Ethan Zuckerman, one of the founders of Global Voices, an international network of bloggers and citizen journalists.

The Obama Administration has to manage the delicate task of maintaining support for regimes in the region, while telling Arab leaders, in public and private, to address the turmoil with more urgent reform, and, at the same time, Obama is trying to increase direct contact with the youthful leaders of the uprisings.

Ahmed Khalil, 29, a veteran of Tahrir Square, hasn't returned to work in his wealthy family's plastics factory. He's part of the "Revolution Friends," a Facebook group that is channeling the revolution's momentum into a civic-awareness campaign. He has printed leaflets and distributed them throughout Cairo, calling on Egyptians to work "For a better Egypt," with specific suggestions such as don't litter, don't blow your car horn for no reason, don't pay bribes, don't allow a police officer to humiliate someone in front of you, don't harass girls on the street, know your rights, stay positive, respect other opinions.

Rapper El Général has written a new rap song called, "Vive Tunisie." It honors the Tunisian "Jasmine" protest, with encouraging shout-outs to other youth movements that are striving for justice and democracy in Egypt, Algeria, Libya and Morocco.

There are so many new faces, so many new names to remember, of active young individuals, who are passionately singing, rapping, fighting in non violent ways. It's like a miracle -- a powerful new generation -- there are thousands of them, and every day more young people are joining in.

Idealistic young revolutionaries are so often disappointed, because the hard guys inevitably take over in the end. Wouldn't it be wonderful if that doesn't happen this time?