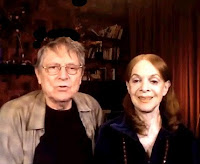 Emily wants to know if John Cullum is ever jealous of other actors.

John says he's envious sometimes, but not jealous, and explains why he's always been fascinated by Peter O'Toole -- not because he wanted to BE an O'Toole. Early in his career in New York, John auditioned for a role that O'Toole did, and didn't get the part, and even now, continues to study Peter O' Toole's choices as an actor.

Emily admits to being jealous of dancers who have "better feet," and more flexibility than she ever had. But as the Cullums chat, they realize the jealousy/envy that performers feel is important -- it's something all performers need to examine --IT'S A TOOL -- a way of improving your craft.

I had no idea that John doesn't know the subject of these videos until they begin.

Burton and Peter O'Toole did the movie Becket together. It's one of my favorite films.

I rank John Cullum as the quintessential musical theatre actor! I love O'Toole and Burton...but all three are different types. However, I can well understand where John would want to study any of these great actors, all of them, brilliant!

I can only imagine the carousing that went on when Burton and O'Toole got togther.

My response would be I would never want to be anyone else, but I agree that learning and building on ideas and techniques is important in all things we do. Great topic.

Thank you for posting this. Envy and jealousy are useless emotions. However we actors can be guilty of it and become spiteful and catty which is a horrible thing. We are all unique and different with individual special gifts and talents. I love Monty Clift but I'm not jealous of him. I'm in awe of him. Al Pacino too. A great artist truly inspires one to be the best one can be. Bless you, Omar.

Fans have strange reactions to running into celebrities they are fans of. If I were to run into JC on the street one day my heart would race and I'd probably be too nervous to say hello. Does JC feel that way about any celebrities? Who would it give him a case of the nerves if he ran into them on the street?